“The Fast and the Furious: Tokyo Drift” available for Download to Burn by CinemaNow 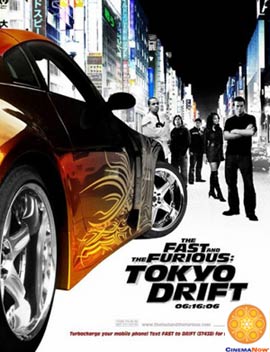 This Tuesday, Online movie service CinemaNow said it will offer a version of Universal Picture’s “The Fast and The Furious: Tokyo Drift” that customers can download onto a blank DVD the same day it is available in stores.

The “download-to-burn” Web release on the same day the DVD lands in stores is a first for a major Hollywood studio. Until recently, studios have been reluctant to offer downloads to “burn,” or copy, for fear of piracy. But, nowadays, young consumers are going online to get their entertainment, as online video sites such as YouTube.com. and many others show evidence of the growing popularity of online downloading.

While no one yet knows exactly how big a market online movie distribution will be, Hollywood’s studios, technology companies and retailers are eager to tap into the segment as it grows.

Earlier this month, online retailer Amazon.com Inc. and Apple Computer Inc. began offering movie downloads, but they do not yet give users the ability to burn. As a result, CinemaNow’s announcement keeps it in the forefront of the nascent market.

CinemaNow said the download of the “Fast and Furious” DVD will be available at CinemaNow for $9.99 and will include all the bonus features of the DVD sold in stores, CinemaNow said.

In July, the company became the first online service to offer movies that could be downloaded, burned and played on standard DVD players. But the service was only for old titles in the studios’ libraries and not for new DVDs.