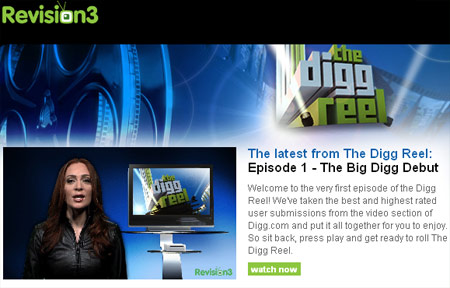 Revision3, a TV network for the current web generation, has revealed that Digg reel, the very first TV program featuring highly rated user-submitted videos on Digg.com, has kicked off. American television personality and actress Jessica Corbin will be hosting the show, which will showcase the hottest videos that cover a variety of interesting things such as crazy stunts and biting satire to politics and world events. These videos will be submitted to the most well-known social content site on the Internet and Corbin will explain why these clips deserve their 15 minutes of online fame.

Jim Louderback, CEO of Revision3 said, “It’s impossible for anyone to watch all the cool videos posted to the Internet every week.” Adding, “By harnessing the power of the Digg community, we can find and summarize the best of the best. Our new show is your one-stop-shop for the best of the web’s videos each week.”

Digg.com has become a favorite destination for all those who dig (read: want to be spoon fed) the best and the hottest news, images, and videos, from anywhere on the internet. And such a move was quite inevitable.

Every Wednesday, The Digg Reel will feature some of the top rated videos from Digg, including diverse topics such as world and business, technology, offbeat, and entertainment. Furthermore, the show will emphasize on the best comments from the Digg community. In addition, show hostess Corbin will also take viewers behind the scenes to meet the creators of videos enabling viewers to ask all sort of questions about the videos, answered.

“The huge popularity of videos on Digg demonstrates how the largest social content community can really help users find the best video content out there,” maintained Jay Adelson, CEO of Digg. “Revision3 will take it to the next level by giving viewers something they can’t get anywhere else—short clips from those videos, comments from our community, and a behind-the-scenes perspective.”

Corbin is co-host of Revision3’s renowned daily show Tekzilla and the former co-host of inDigital. Her tryst with the world of media and technology has been quite long indeed. Prime-time news program TechLive, CNN Headline News, hostess for the series Movie Fanatix, panel guest on talk shows including ABC’s The View, CNN’s Larry King Live and American Morning, Fox Sport’s Best Damn Sports Show Period, and E! News Daily are a few of the leading names that Corbin has been associated with. She is also the co-founder of TheFempire.com.

Corbin claims to be a Digg user for two years. “I dig Digg– it’s how I keep up to speed on what’s happening on the web. So I’m thrilled to be hosting The Digg Reel because it allows me to show everyone the great videos the Digg community is into.”

The debut episode of The Digg Reel is already available on www.thediggreel.com, whilst the future episodes will hit every Wednesday at 4 p.m. EST.