Rumor has it that the Samsung Galaxy S6 will employ an Exynos 7 Octa processor based on the 14nm process. This has amazingly turned out to be true which means that the company’s upcoming flagship will be ahead of the competition with a much better chipset.

The existence of the silicon was confirmed by the giant through a presser where it notes that the chip can deliver better performance with lower power consumption. According to Samsung, the new Exynos 7 Octa series will see a 20% increase in performance and a 35% drop is energy consumption compared to chips based on the 20nm process. 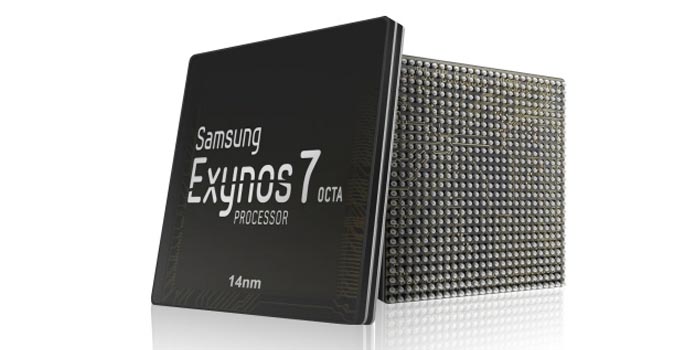 Samsung hasn’t been clear on which ARM architecture it’ll be using for the chipset. But considering that the Cortex A72 is optimized for the 16nm FinFET process, it’s best choice around and of course, it’ll be clubbed together with the low-power Cortex A53 cores in a big.Little configuration. For graphics, previous data has shown the Mali-T760 as the GPU of choice.

Now, the presser makes no mention of the Galaxy S6, but it’s pretty much obvious that Samsung will debut its new high-performance silicon with a new flagship. Also, the new Exynos SOC is already in mass production and this would go well with previous rumors as well as the leaked data which shows the handset set new record scores in benchmarks.’

What’s more, the company’s Semiconductor subsidy has announced the first eMMC 5.1 chips which will arrive in capacities of 16GB, 32GB and 64GB with read and write speeds of up to 250Mbps and 125Mbps, respectively. And you can expect to see these modules onboard the Galaxy S6 as well.

I am #TheNextGalaxy. See how I give more time to others at #Unpacked. https://t.co/zfYs03p90P

Samsung’s Exynos 7 Octa isn’t going to be the only 14nm processor this year as Intel’s CherryTrail SOCs have already started shipping to OEMs. However, they will be mainly used in tablets running Windows.