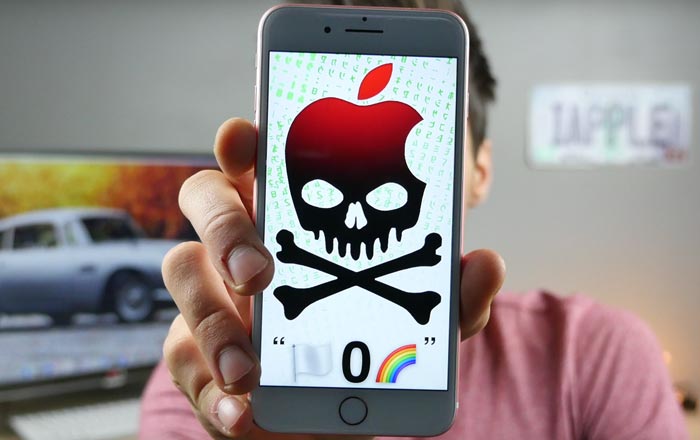 A few weeks after the discovery of a malicious text message that could freeze an iPhone’s Messages app, a new missive has the power to crash an iPhone or iPad completely. Like the earlier case, the prank was first highlighted by YouTube user EverythingApplePro and created by developer Vincent Desmurs going by the name vincedes3.

Surprisingly, the bug is triggered by simply typing out the waving white flag emoji, a zero, and the rainbow emoji and sending this combination to a victim. The message needs to either have a hidden character called a variation selector along with the string of symbols or it has to be embedded within a contacts file that has to be sent via iCloud Drive to an iMessage contact.

Either method is supposed to crash any iPhone or iPad running iOS 10 or below for up to 3 minutes at a time. According to Desmurs, the breakdown occurs because of the way Apple handles the variation selector. He explains that the rainbow flag isn’t an emoji by itself since it’s actually made up of 3 separate elements namely the white flag, a character called variation selector 16 (VS16), and the rainbow.

VS16 basically tells the iPhone to blend the two characters into a single emoji which gives rise to the rainbow flag. Desmurs then assumes that the mixture of the white flag, zero, VS16, and rainbow emoji in the new bug makes the handset try to merge the first two into an emoji. This clearly can’t be done, triggering the smartphone to fall apart.

Desmurs says that this isn’t normal behavior for an iPhone, but the presence of the rainbow emoji throws it off enough to attempt such a blend. The Guardian reports that certain individuals have to delete the iMessage conversation containing the bug to prevent their phone from rebooting every time they open the app.

Some can’t even access their iPhone for long enough to do so, while others have to be sent a new message or create one with Siri to open Messages.