The much awaited launch of the Tesla Model 3 electric car has finally taken place, and as expected, it’s something that should fit the budget of a large number of consumers due to its relatively low price tag. This vehicle will be made available at just $35000, and is surprisingly also slated to arrive in India.

The Model 3 is part of Tesla CEO Elon Musk’s vision of taking the electric car to the masses, and will be delivered by the end of 2017. Touted to be one of the safest cars in the world – even with its highly exciting Autopilot feature onboard – the new vehicle aims to provide at least 215 miles of range. That’s around 346 kilometers, to save you the math.

The thing with electric cars is that taking them on long drives requires you to charge their batteries on the go. For this, Tesla has already implemented a bevy of Supercharging portals all throughout the US, which the Model 3 of course supports. It’s worth noting that the company plans to implement an India-wide Supercharging network as well by the time it’s out. 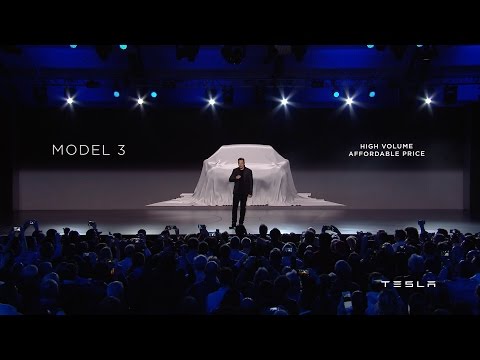 Coming back to the car itself, it can manage to go from 0 to 60mph in under 6 seconds. And these are just numbers of the base model, with top tier versions expected to offer better figures than that.

Tesla opened pre-orders for the Model 3 24 hours before its unveiling. And by the time Elon Musk took stage, 115000 pre-orders had already been placed. If you too wish to book it for yourself, you can do so now by paying $1000 upfront. This fee is refundable if you change your decision later.

Although, the Model 3’s price of $35000 converts into just over 23 lakhs, it is expected to cost way more than that owing to duties levied on imported cars in the country. A user on Reddit has done some calculations and has predicted that its final price in India could come to a whopping 72 lakhs.

Anyway, there’s still a lot of time to go for the Tesla Model 3 to be released, with Musk having promised another grand event to reveal something more about it. Let us see how things shape up from here on.