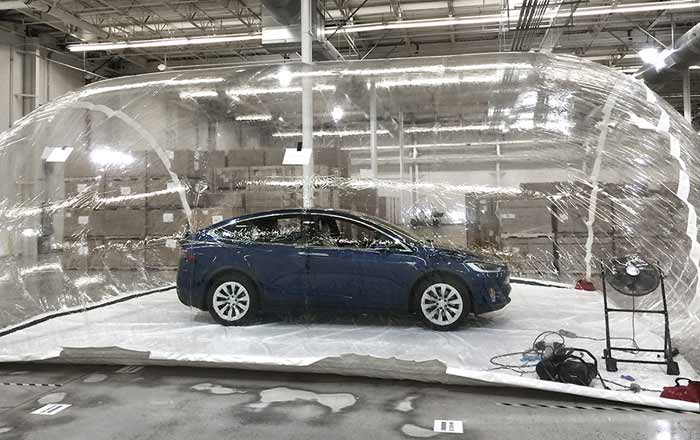 Tesla, the American company owned by Elon Musk, has over the years been giving us stuff that literally look like they’re plucked from the future. The Bioweapon Defense mode on the Model X as well as the new variants of the Model S electric car are its newer, exciting inventions.

To be clear, it has been named this way because Tesla claims that the mode can save you from an actual biological attack. This is because the air filters in the car are so strong they not only completely filter the air inside in minutes but also some of the air that’s outside the vehicle.

In order to demonstrate the Bioweapon Defense mode on the Model X, the company ran a test which involved pumping extreme levels of polluted air around its car which was enclosed in a bubble. The protective cover was to erected so that the gases would not harm the people around the area.

When the defense mode was turned on, it managed to neutralize the air inside the car within a matter of just two minutes. To emphasize the system’s capabilities, Tesla also mentioned that the pollution pumped around the car was almost 200 times more than the world’s current highest levels.

According to the World Health Organization, pollution kills three million people in the world every year. Tesla claims that its Bioweapon Defense mode will save lives as well, other than creating a breathable atmosphere in polluted environments.

Tesla is still to mention whether the upcoming Model 3 electric car will come with this feature obboard or not. However, it’s safe to assume that it will be present on the vehicle since its relatively low price is expected to result in lots of sales in developing markets like China and India where pollution is quite a big issue at the moment.

Tesla’s cars are creating a storm worldwide not only for being environmentally friendly and contributing towards saving traditional energy resources, but also for giving us highly advanced futuristic technologies like the Autopilot mode, apart from the Bioweapon Defense mode.