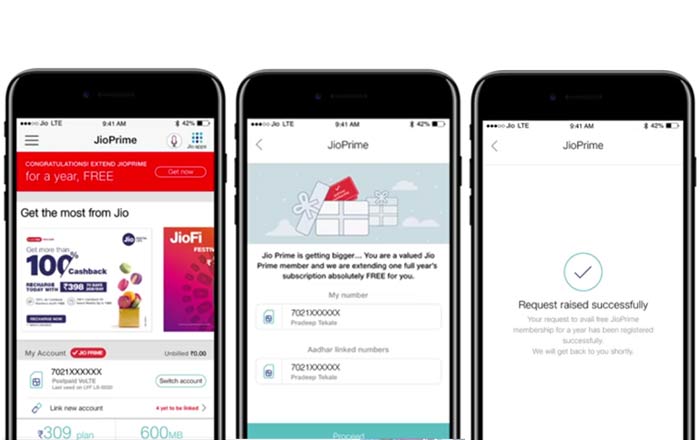 Reliance Jio had announced its Jio Prime subscription service over a year ago, asking people to pay Rs 99 for a year’s worth of extra benefits as its months of freebies came to an end. However, the company didn’t reveal what would happen after the year was up on 31 March 2018.

This brief period of mystery is now over as Reliance Jio has announced that existing Jio Prime members can renew their subscription for free. This is great news for anyone who joined the scheme since it means their 1-year plan is getting extended into a 2-year one at no extra cost.

Anyone who decides to join Jio Prime after April 1 will have to shell out Rs 99. The plan will again stick around for 12 months till March 2019 rolls around, at which point everyone will once again wonder what Reliance has planned for them.

Current customers will find a new banner at the top of the MyJio app telling them their Jio Prime subscription is being extended for a year. Tapping on the “Get now” button will take users to a new page informing them that they’re a valued Jio Prime member who’s getting an extra year of service for free.

After checking the phone number registered, hitting the proceed button opens up yet another page telling people that their request has been registered successfully and Jio will get back to them shortly. It should be noted that this is a limited period offer, so it could expire at anytime.

Jio Prime promises 20% to 50% more value for members. While it’s presented as an opt-in service, users typically have no choice but to sign up if they want to benefit from the various deals Reliance announces from time to time like the recent Football Offer.

How Do Online Reviews Affect SEO?