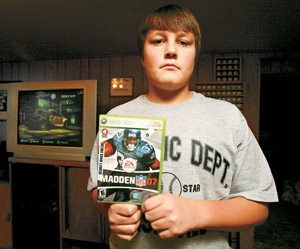 When Kolton Mahoney inserted the Madden NFL 07 game in his new Xbox360 console on Christmas, he was all geared to play the game but was soon shocked to see the image that emerged on his television screen.

The first thing that came to Mahoney’s mind was, “This is definitely not Madden.”

Kolton immediately turned off the Xbox and notified his parents, Linda and Tim Mahoney, who viewed the video game and were equally surprised.

“We’ll get rolling on it,” he said. The incident may be the first of its kind in Utah, he said. “If somebody is doing this, we want to stop it.”

The task force will work with Layton police and California authorities to determine who the mastermind is, behind placing the filthy material on the computer game, therefore charges of providing pornography to a child can be filed, McQuiston said.

Kolton received the video game from his uncle, Dan Mahoney, who purchased it Dec. 2 at a Circuit City store in Modesto, Calif. The game appears to be authentic, is embossed with a Madden NFL 07 label and came in a factory-sealed case, Linda Mahoney said.

Stephanie Nightlinger, a spokeswoman for Circuit City based in Richmond, Va., said company officials were unaware of the problem with the Mahoneys’ video game until contacted Friday by the Standard-Examiner.

Nightlinger said to her knowledge the company has not received similar consumer complaints about Madden NFL 07 or other video games it sells, but will investigate the incident.

“There was some sort of slip up somewhere,” she said.

The Mahoneys have contacted representatives with EA and at the Circuit City store where the game was bought, but no one is taking responsibility for the problem.

“The buck’s being passed,” Tim Mahoney said. “Somebody should be held accountable.”

Mr. Mahoney is upset that pornography is hitting his family so close to home. “You know, especially here in Utah where we’re trying to get away from the pornography and the exploitation of children. And now it comes right into your home! You just don’t feel like that’s going to happen,” said Mr. Mahoney.

The Madden NFL 07 game is manufactured by Electronic Arts, based in Redwood City, Calif.