Technology in 2010: Gadgets and innovations that sparkled the brightest

Summing up every bit of technology that had us ‘oohing’ and ‘aahing’ throughout the year may sound like a time-consuming notion. But imagine heading into a new year without giving credit to the newsmakers that had our days zip by faster than we could say ‘And Google shall inherit the earth’. So here’s a look at our pick of everything from tech world that grabbed our fancy in 2010. 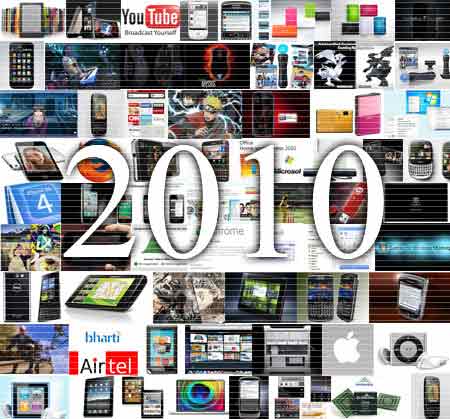 January: The month indeed took the plunge in removing the highly looked upon curtain, leaving creative wits to get back ‘in the saddle’ and put their best foot forward. The very first month was fairly dominated by innovations from sharp minds of 2010. First up was the unveiling of the 17-inch MacBook Pro from Apple’s cradle that was loaded with a new uni-body and a built-in battery, flipping out green features. Next, we spotted Palm pyramiding mobile buffs’ fervor by announcing its stylish yet diminutive Palm Pre Plus and Pixi Plus phones. Integrated with a 3G Mobile Hotspot, the handsets literally tickled all with a myriad of crowd-puller attributes. On the storage front, SanDisk pranced with the ultra-compact Cruzer Blade USB flash drives. Easy to slide into the pockets or purse, this one had its chin up for its capability to support plug-and-play.

February: The second turn in the calendar’s path brought us to WordPress introducing an official app for Android users. The announcement enabled users to manage their blogs when junketing. Firefox too marked its presence by unfurling Firefox for Mobile on the Nokia Maemo platform. The mobile sphere smiled yet again with BlackBerry going ‘bold’ with Bold 9700 featuring 3G capability and a 2.44-inch light-sensing display. The second month also had gaming enthusiasts happy with Nintendo offering an extensive gaming array. The Phoenix Wright Ace Attorney: Justice For All, Art of Balance and WarMen Tactics for the Wii and Sonic and Knuckles for the Virtual Console completed the month.

March: Marking the onset of spring, the internet sphere got busy with welcoming Google’s online photo editing service ‘Picnik’. Those swirling with editing talent were offered the ability to do touch-ups, crop and even insert stimulating effects and brighten up their pictures. Next was big news – Microsoft astounded all by releasing its Zune HD media player. Sony joined the scene with the colorful Vaio E series of mini notebooks. The basket of ostentatious mobile phones was blessed with Samsung’s Galaxy S at the same time.

April: The month started with Motorola unfurling its Android 2.1-powered Milestone which revamped the mobile web experiencing. The next launch that literally dazzled all with unexpected tweaks of innovation was the iPad from Apple. With a sleek chassis holding onto several interesting features, this one indeed impressed us to the core. The app world was glamorized when Twitter released Twitter for BlackBerry app by RIM along with Twitter for iPhone. The iPhone OS 4 was announced in April as well to tack on the experience for iPhone and iPod admirers. Merging online services and PC capabilities in a phone enclosure, Microsoft Kin jumped high in the month, whereas the Opera Mini app hit the App Store with full enthusiasm.

May: The fifth call was invaded by Microsoft, pleasing social butterflies with its new Windows Live Messenger. Engaging senses into full screen high-definition video chat, online games and sharing of photos was made feasible. For portable computing, the Vaio P range of notebooks were fluttered in by Sony. Gaming admirers were delighted by the Abyssus Mirror Special Edition gaming mouse from Razer’s collection. Pokemon Black version and Pokemon White version also made it to the news for gaming buffs.

June: In addition to International Cricket 2010 smashing into stores, the gaming sphere was spotted with the PlayStation Move motion controller and the Nintendo 3DS. Microsoft Office 2010 along with the Microsoft Vision 2010 and Microsoft Project 2010 forayed as well. For Apple loyalists, the iPhone 4 embedding an A4 processor and a 3.5-inch retina display was dished out. Safari 5 for Mac and Windows also gleamed into the scene. The month couldn’t fend off adding Dell Streak into its list, which indeed toughened the war between tablet choices to finally settle down with.

July: The second half of 2010 started with Amazon rolling out the new generation Kindle DX eReader with a 9.7” e-ink display and 3G connectivity. Apple didn’t just release their new Mac Pro desktops with ATI graphics and a choice of Intel Xeon processors; the company also came out with a new update to the Safari 5 browser during this period. Motorola charmed its way into ladies’ hearts with a squarish handset running Android 2.1 and flaunting a full QWERTY keyboard. What’s more, YouTube then ended the show by offering uploaders fifteen minutes of fame.

August: Infinitec inaugurated August by tempting the hoarders within ourselves with the Infinite Memory USB Drive which allows wireless streaming of content stored on a PC to devices like Blu-ray players, printers and others. Google followed by offering Gmail users the option of signing into multiple Gmail accounts at once and RIM officially launched the BlackBerry 6 OS. 2K Games and Irrational Games then got together to give gamers a treat by announcing BioShock Infinite for 2012. It was a month for all sorts with Kodak taking the wraps off their snappy new PlayTouch video camera hosting a 3” capacitive touchscreen and Samsung giving everyone a peek at the Galaxy Tab by reeling out an official video for the tablet.

September: This month saw some big names come out and play for our attention. Sony’s PS Move controller, Google Instant, RIM’s BlackBerry PlayBook tablet and the 3.5” Nikon Coolpix S80 DSLR camera got a fair share of our interest. Microsoft’s Internet Explorer may be facing some tough competition from other browsers, but we can at least give them credit for trying to retain a firm hold in the browser segment. IE9 beta now has a download manager as well as jump lists, Aero Snap, thumbnail controls and tear-off tabs. Oh, and Apple also seemed to release iterations of everything ‘i’ in September.

October: Google was practically the opening act for the show of newsmakers during this month with the launch of Google TV that blends TV programming with the open web. Dell followed up by announcing the Venue Pro with Windows Phone 7, though they were not very forthcoming with the launch details. Now we’ve just got to fit Games for Windows Marketplace, the Barnes & Noble Nook Color and Naruto Shippuden: Ultimate Ninja: Storm 2 for Xbox 360 and PS3 in one breath.

November: Somewhere in the first half of November, Treyarch launched the much awaited Call of Duty: Black Ops for Xbox 360, PS3 and PC, finally. This was in the same week that Microsoft’s Kinect for Xbox 360 strutted into U.S. and U.K. shelves. Tech world also got a whiff of news on a rumored iPad 2, iTunes 10.1 featuring Airplay and support for iOS 4.2 as also Google Docs being editable while on the move with the help of a documents editor.

December: This month did have a fair share of newsmakers though Google decided to play the starring role. We had the Gingerbread launch along with the Nexus S running the said OS, as well as some major Chrome OS and browser updates. In a fit of the holiday spirit, the company also announced free voice calling over Gmail through 2011 for users residing in the U.S. and Canada. Lastly, Amabarella came out with an applications processor dubbed iOne, paving the way to smart cameras based on Android.

When you look back at the list, most of it comprises of things we didn’t have the year before on this day today. By this time next year, we’ll hopefully have at least prototypes of those handsets with holographic projectors that IBM talked about in their ‘Next Five in Five’ report. Happy New Year!