We certainly had a lot to feast upon in this past year. Right from eye-catching mobile phones to head-turning laptops and revolutionary platforms, the year had a lot to offer us. Ushering in 2010 with a list of the year’s top ten this-or-that is way too routine and something most people may be expecting complacently. So we’ll just run through newsmakers that left a lingering impact on our minds over the past twelve months and readers can tick them off mentally to check if these stories interested them too. 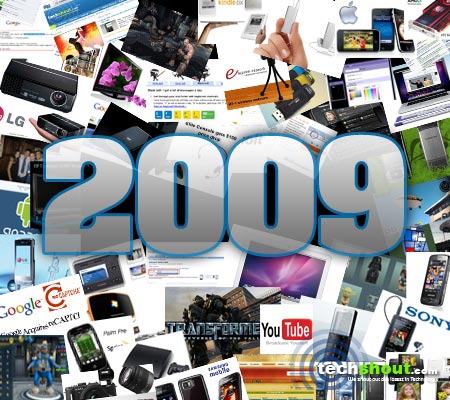 A piece of advice: Comment on interesting tidbits as we break them and it’ll probably make it to the list next year around. Then there are higher chances of finding something to tick off against our favorites.

January: The month of January was fairly ruled by innovations from the CES 2009. However a number of other exciting releases also made it to our bulletin. First up was the launch of HP’s dx9000 TouchSmart Business PC that was loaded with interactive technology to the core. Next, we saw the launch of what Samsung claimed to be the greenest mobile phone in the market namely the F268. The Energy Star ratified phone was enthusing indeed. On the gaming front, January saw the release of four exciting Spore titles mainly Spore Galactic Adventures, Spore Creature Keeper, Spore Hero and Spore Hero Arena.

February: Early on in this month, gamers were treated with Activision’s Transformers: Revenge of the Fallen game that sported an exciting environment and allowed players to engage in life-threatening battles. Next, it was internet-related news that caught our attention. First we saw, Facebook adding the Like button on their site akin FriendFeed. This tidbit was closely followed by YouTube’s offline video download options that actually managed to create quite a stir among dedicated YouTube fans. Finally, by the end of the month, we saw Gmail getting all dyed with a new color customization options in themes for users to play around with.

March: Marking the onset of spring, the hardware terrain also got some warm vibes from Sony in the first week of March. Users got to ogle at two new portable photo printers namely the DPP-FP97 and DPP-FP67 that could make for instant party accompaniments with instant picture prints. As we moved into the second week, Samsung unveiled its Pixon 8 megapixel camera phone for mobile cum photography enthusiasts in India. The third generation iPod Shuffle also made it to the news section. Revealed to be much smaller, the device wrapped in the VoiceOver function that held the attention of many. March also saw Google rolling out its Image Search feature for Android-based devices and the iPhone. The month ended on a good note with Microsoft unveiling Internet Explorer 8.

May: This month was invaded by many products but among the array were some noteworthy mentions. The Amazon Kindle DX reading device was unleashed sporting a large screen display and packed with loads of advanced features. Sprint added to the various mobile phone choices by bringing forth the Palm Pre handset. Sony brought some groove into May by announcing the Sony X-series Walkman Video MP3 player. The LG palm size HS102G LED pocket projector and AMD’s air-cooled 1 GHz ATI Radeon HD 4890 GPU released this month as well. Google also received some new updates like Search Options.

June: Apple contributed quite a sizable amount to the month with its inclusion of the iPhone 3G S handset and Mac OS X Snow Leopard. Smarter than a smartphone was how the Samsung Jet handset could be described. The mobile phone comes with an integrated traditional user interface and other smartphone features. This month also witnessed Kingston hitting the markets with its large storage 128GB USB flash drive. June wouldn’t be complete without the mention of a new Tips space by Google entitled Become a Gmail Ninja.

July: Google certainly made its niche this month with the unfurling of the Google Chrome OS for netbooks. The company also brought forth a new application dubbed as Moon in Google Earth. This allows users to have a better understanding of our natural satellite as well as the vast reaches of space. July also saw Windows 7 and Windows Server 2008 R2 going beyond its development phase and getting geared up to roll out with future products. Orkut members could avail of the new Face Detection feature via their Orkut photo albums.

August: This month was a complete treat for gamers as the Sony PlayStation 3 Slim made its way onto the scene. If that wasn’t enough, the Xbox 360 Elite console from Microsoft saw a $100 price drop as well. Batman: Arkham Asylum was also launched this month. Coming away from gaming, the Google chief executive officer Dr. Eric Schmidt resigned from Apple’s Board of Directors. August also saw its fair share of phones and cameras being unveiled with the Nokia Linux-based N900 smartphone and Panasonic Lumix DMC-GF1 camera deserving special mention.

September: Those who had been saving up for a good camera instead of splurging it on a high-end camera phone may have felt a distinctive itch to loosen those purse strings back when Samsung brought out the Pixon12 a.k.a. M8910 phone with an in-built 12MP camera. Google meanwhile acquired reCAPTCHA technology in a two for one deal in this month. Application of this technology should deliver better fraud and spam protection for the company’s products, while perking up the process of scanning projects like Google Books and Google News Archive Search.

October: Apple decided to upgrade their MacBook with Led-backlit display, a glass multi-touch trackpad and sturdy polycarbonate layout. It is powered by a built-in battery that allows for up to seven hours of wireless use on just one charge and can be recharged 1,000 times. Google caught our attention yet again in October with Adsense for Mobile and search ad options for optimizing the advertisement potential on smartphones. We think it was a smart move, considering the number of people using such devices for internet browsing nowadays.

November: The news biggies for November are difficult to list out in one breath and demand for much more attention. There was Nokia’s 5330 Mobile TV Edition 3G phone, Intel Reader that reads aloud text shot through its high-resolution camera, LG’s gorgeously transparent GD900 Crystal Touchpad slide-out phone and launch of PlayStation Network Video Delivery Service for enthusiasts across Europe. Stars Wars’ legions of fans were presented with flash drives fashioned around the aforesaid movie’s characters by Tyme Machines.

December: Amidst rumors of an upcoming Google Android phone and ferocious victory cries sounded by Little Gray who completed World of Warcraft’s all 986 achievements, three other tidbits made for interesting reads too this month. Sony Ericsson and SchultzeWorks design studio offered two beautiful gizmos in the form a partially transparent phone dubbed Xperia Pureness and a Philco TV-set inspired orange and metal PC. Layar v3.0, software that enables developers to create 3D worlds invisible to the human eye until one points their phone at where these layers are hidden, was released for Android 1.5 and 1.6.

All the 12 months of 2009 were packed with a plethora of great gadgets, delightful devices and interesting internet-related news. We hope that 2010 brings us all this and more. You can be sure that we will be there to bring all the action right to your fingertips.