Walmart-powered Straight Talk has just got Target Brightspot to worry about. The latter retailer is now taking on the additional responsibility of a Mobile Virtual Network Operator (MVNO) offering prepaid plans on phones which will ride T-Mobile waves.

The company will kick off the service starting from October 6th. Signing up for it involves three simple steps. It starts with selecting a prepaid plan. If talking and messaging is all you use your phone for, Brightspot has a $35 monthly option which comes without data services. 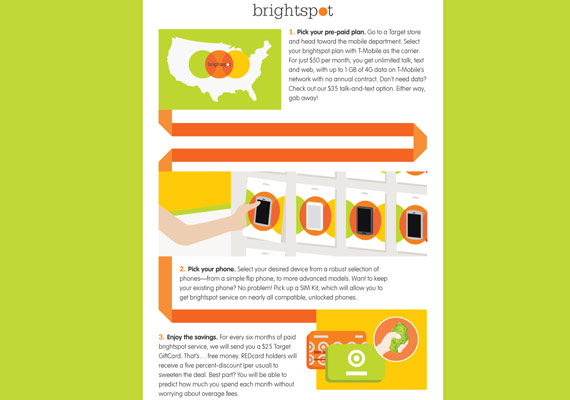 If a handset that merely texts and calls is not your cup of tea, you’ll need another monthly plan, right? There’s a $50 one delivering unlimited talk, messages and data. But 1GB of T-Mobile’s 4G data is the maximum you get on this plan per month, after which you’ll be surfing the web at slower speeds.

Step 2 of the Brightspot subscription process requires customers to pick a device from the pre-selected bunch. For those who’d prefer to stick with their old phone, the MVNO will also throw in just the SIM if the concerned model is compatible with the T-Mobile network.

Getting new customers is very tough. Most people already own cell phones tethered to a carrier because of the temptation of subsidized prices. That’s why Target has thrown in some bait in the form of a $25 gift card for subscribers for every 6 months they prove their loyalty to the network.

The best thing is that there’s no contract attached to the deal. Target hasn’t yet revealed the full lineup of handsets available on Brightspot.