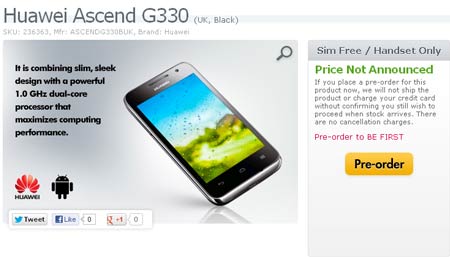 Through TalkTalk, the Huawei Ascend G330 will carry a free price tag and it is due to release in the UK sometime next month. The smartphone places itself as an interesting pick for the budget-minded segment by delivering a rich Android experience.

The handset operates on the Ice Cream Sandwich platform and the manufacturer has thrown in its very own HAP 5.1 UI. This interface aims to deliver convenient access to main smartphone functions such as calling, messaging and camera straight from the lockscreen itself. Additionally, the company claims the phone to be ideal for video playback and gaming. It comes pre-loaded with the BBC iPlayer and BBC News applications along with the Sims Freeplay title from EA Games. There’s even access to the Google Play store from where users will be able to download content over Wi-Fi or 3G connectivity. 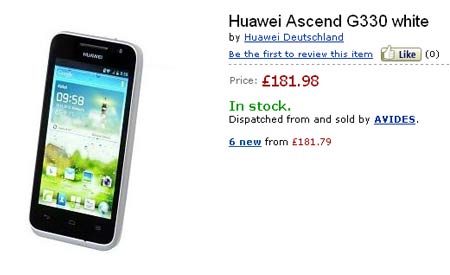 Powering up the device is a dual core processor. The front features a 4-inch WVGA display, while the rear sports a 5MP AF camera with LED flash. The Ascend G330 is the second Huawei-made phone to launch on TalkTalk. The entry-level Ascend Y201 recently went live through the carrier bearing a 3.5-inch IPS touchscreen, an 800MHz processor, a 3.2MP camera and a 1250mAh Li-ion battery. The company has thrown in a 4GB microSD card and states that the embedded slot can support up to 32GB. This phone retails for free with plans comprising of £5, £10 and £20 per month.

The Huawei Ascend G330 can be picked up for free through TalkTalk in the UK. However, potential buyers will have to sign up for a 24 month contract with tariffs starting at £10 per month. Customers can also opt for £15 and £25 subscriptions with varying airtime allowances. The unlocked carrier-free version of the smartphone is up for grabs through Amazon for approximately £181.98, while Expansys is offering it for pre-order. The retail cost for the latter is yet to be disclosed. 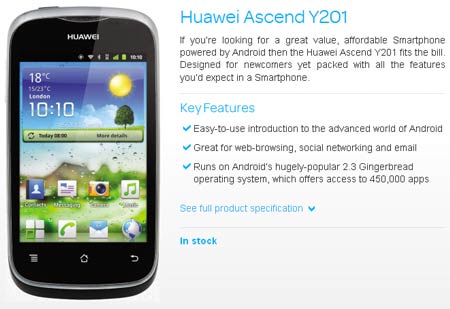 Here’s a quick glance at the G330’s main specifications: