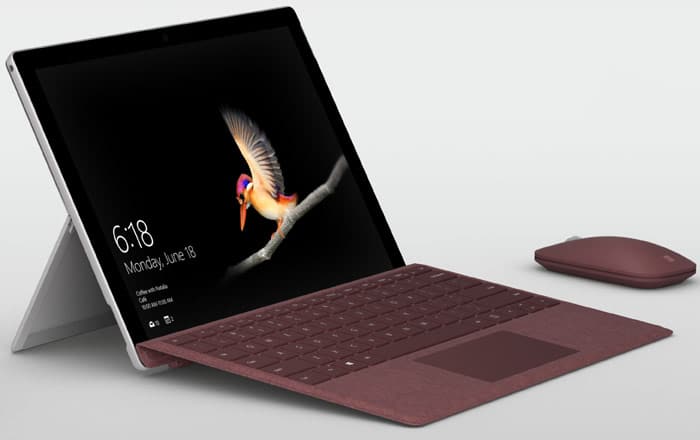 That’s a lot more affordable than the current Surface Pro lineup. The price will help the Surface Go take on Apple’s $329 iPad. Microsoft has maintained the same premium look as its main series for the budget device, so that’s a big plus point. However, the same can’t be said for its internal specs.

The Surface Go runs Intel’s dual-core 7th-gen Pentium Gold 4415Y processor. Microsoft says it chose the SoC because of its thin, fanless design and balance between power, performance, and battery. The tablet apparently lasts for up to 9 hours as a result.

However, the chipset is considerably less powerful than its Core i5/i7 counterparts. That may be why Microsoft has installed its lightweight Windows 10 with S mode inside the device. Users will only be able to download apps from the Microsoft Store while the software is around.

They can always choose to upgrade to the full Windows 10 experience if they want to, at no extra charge. Microsoft began allowing that a few months ago. Specs-wise, the Surface Go has a tiny 10-inch 3:2 PixelSense Display, weighs in at 1.15 pounds, and measures 8.3mm only.

Specifications of the Microsoft Surface Go:

Microsoft will put the Surface Go up for pre-orders on July 10 and sale on August 2 in markets like the US, the UK, Norway, Australia, Canada, and Germany. Only the Wi-Fi version is going to be available right now, with the LTE model set to hit shelves later this year.