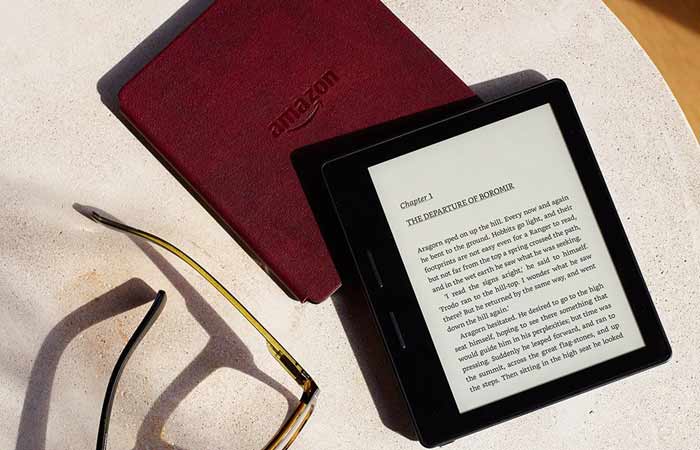 Amazon has taken the (leather) covers off its latest 8th-generation Kindle Oasis e-reader, its most expensive one yet. At $289.99 in the US and Rs 23999 in India, most folks would be able to buy a fully-fledged tablet.

Amazon is betting big on dedicated e-readers who will be willing to shell out such a huge sum of money. Its aim is to make the device disappear so users can lose themselves in a book in a distraction-free environment. The company is looking to achieve this by making the Kindle Oasis 30% thinner and 20% lighter than previous offerings.

Furthermore, the Kindle Oasis flaunts an asymmetrical tapered design with a grip on one side to facilitate easier one-handed reading. The brand claims this setup shifts the center of gravity to a person’s palm, replicating the feeling of having the spine of a physical book in their hand.

Consumers will be able to turn a page by using the touchscreen or tapping the buttons located on the grip. They can additionally use either hand to read as the Amazon device automatically rotates the orientation to match. The major shake-up that the new Kindle brings is the addition of a leather cover which does double duty as a charger for the device.

Also Read: If you have an old Kindle you must update it before Tuesday to keep it working

Combined with the Kindle Oasis’ own battery, this setup can apparently keep the gadget going for 9 weeks of regular reading and months on standby. There’s also a hibernation mode which reduces power consumption when the e-reader is not being used. One of the most common complaints about such gadgets is that they cause eyestrain due to staring at a display for hours at a time.

Amazon has tried to minimize this issue by implementing a redesigned built-in front light which shepherds the light towards the surface of the 6-inch display rather than shining it directly into a user’s eyes like most back-lit tablets. The system features over 60% more LEDs than previous Kindles and offers a 300ppi high-resolution screen.

All in all, the Kindle Oasis is indeed the ‘top of the line’ device which Amazon CEO Jeff Bezos had promised last week. It remains to be seen whether it’ll be received enthusiastically by e-readers given its high price tag. It’s now up for sale in the US and India, with shipping set to begin from April 27.