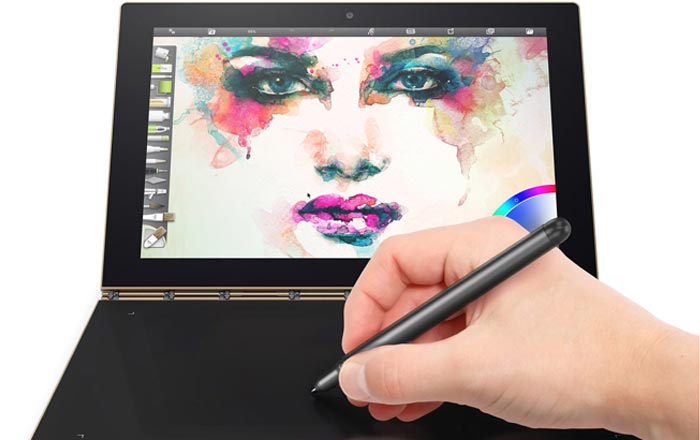 Lenovo’s IFA 2016 appearance was dominated by the unveiling of an all-new Yoga Book, a tablet-laptop hybrid composed of two screens. The company has now begun sending out invites for an event on December 13 where it’ll officially launch the device in India.

The Yoga Book has a lot of unique attributes going for it. Top among them is its second panel which acts as a digital keyboard and sketch pad. Lenovo calls the first a Halo keyboard given its non-physical status. The key advantage of having such a setup is adaptability.

The Lenovo 2-in-1 absorbs what users write over time to bring about fewer errors via a combination of in-built prediction, artificial learning software, haptic touch feedback, and continuous optimization. The secondary display also functions as a blank slate to jot down notes or sketches via a Real-Pen stylus and sheets of paper.

The brand further calls the Yoga Book the thinnest and lightest 2-in-1 hybrid in the world thanks to its 9.6mm thickness and 960g weight. It’s priced the offering at $499.99 for the Android version and $549.99 for the Windows one. The figures roughly translate to Rs 33800 and Rs 37180, respectively.

Here’s a neat look at the specs of the Lenovo Yoga Book:

We’ll fill you in on the Lenovo Yoga Book’s Indian cost and availability details the moment it goes official.