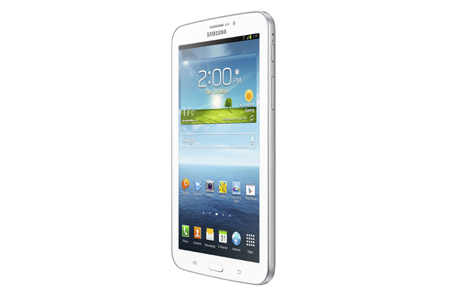 Contrary to a recent rumor, Samsung has pushed out its Galaxy Tab 3 device not with a 10.1-inch or an 8-inch display, but a 7-inch one, putting forth a humble challenge for the flurry of other similar-sized players in the market. The company is promising ‘better performance and multimedia experiences’ through this slate, and has also gone on to reveal its exact specifications. The price details however, have been kept under wraps for the time being.

This Android Jelly Bean-based slab sports a thinner bezel than the one that’s present on its 7-inch predecessor. It houses under its hood a 1.2GHz dual core processor which is given assistance to in its operations by 1GB worth of RAM. Two models will be released based on their internal memory storage, with one possessing 8GB worth of hoarding capacity and the other, 16GB. For further expansions, a microSD card slot with support for 64GB worth of added storage will also be provided. 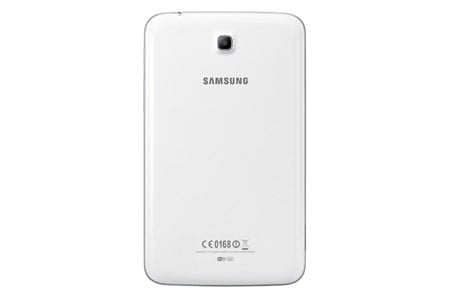 In terms of its dimensions, the device grabs a 111.1mm x 188.0mm x 9.9mm frame. Both Wi-Fi as well as 3G versions are set to enter the markets, with their weights set at 302 grams and 306 grams, respectively. No news is out yet about any 4G LTE variant for western markets. Talking about the slate’s screen, it can be observed that it is a TFT display throwing its visuals out with a resolution of 1024 x 600 at 169ppi.

A 4,000mAh Li-ion battery will be powering the device, but the amount of derivable time which users will be able to garner hasn’t been mentioned by its maker still. The usual dual camera setup makes its way onto it as well. A 3MP rear shooter exists sans a flash, while there’s even a front-facing 1.3MP snapper for video calling purposes. 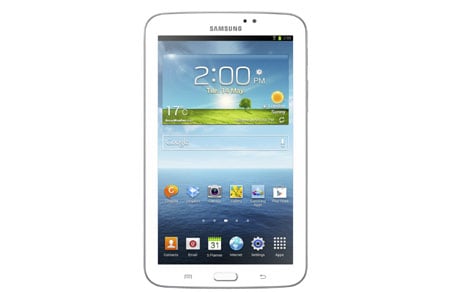 Other essentials like Wi-Fi Direct, Bluetooth 3.0, USB 2.0, A-GPS + GLONASS and more have also been taken care of by the company. And apart from ChatON, a number of Google-specific applications will be provided along with it. Seeing its features, we can predict that the Samsung Galaxy Tab 3 wouldn’t sell for much large an amount. Its Wi-Fi version will be seen coming out globally in May, and its 3G variant will follow in June.