T-Mobile Unlimited Any Mobile plan scheduled for launch next month?

If limitless calling on the T-Mobile network’s current Classic plans wasn’t good enough, then the rumored Unlimited Any Mobile plan from the carrier is most likely to fill up the gaps. This possible upcoming offering is expected to deliver unrestricted calling to all domestic mobile numbers from any network provider in the U.S., even Puerto Rico.

If the guys over at TmoNews are to be believed, the new subscription scheme should make its debut starting next month, April 4 to be more accurate. As we’ve already mentioned, the upcoming unlimited plan should allow users to communicate with others on any mobile network without worrying about crossing their minutes. 80% of the calls made through this carrier are said to be to mobile numbers. So for a fee of $10 per month, this plan should present itself as a beneficial alternative to pricier ones for users with high conversing needs. 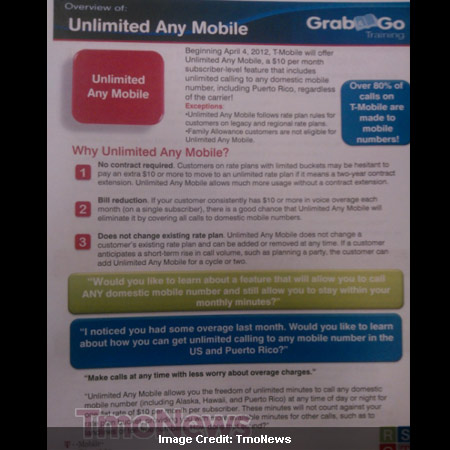 Training material acquired by the reporting website states that users will be able to conveniently add this plan to their existing one and remove the feature at any time, without additional charges. Since it’s said to be an add-on extension, the need for subscribing to a new contract isn’t required. At present, T-Mobile plans offer unlimited mobile-to-mobile calling over its network, texting and data for a starting price of $79.99 per month and a 2-year agreement. The company also has 3 pay per day subscriptions that are priced at $1, $2 and $3.

The T-Mobile Unlimited Any Mobile price amounts to $10 per month and it is speculated to launch on April 4, 2012.