T-Mobile to Sell iPhone 3G for 1 Euro in Germany, with a Catch 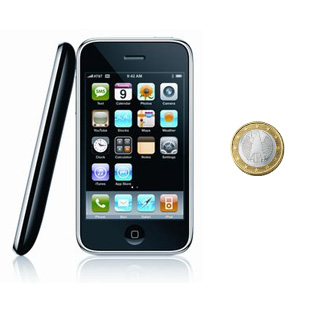 If you thought that 1 Euro held no value in this economically inflated world, then think again!

Deutshe Telekom’s T-Mobile has announced something that’s sure to shake the ground under you. The telecom operator has revealed that it will be selling Apple’s latest iPhone 3G for as low as 1 euro (0.78 pence) for the 8 GB version, in Germany. But hold on, the best thing’s in life don’t come cheap, and even if they do, they surely come with loads of strings attached. And the new offer by T-Mobile is no different. To avail of the 8 GB version, you would have to go in for a 69 euro monthly contract with the network provider.

Apart from the 3G feature, the one place where the latest iPhone 3G scores over its predecessors is in the fact that it has given up on its assertion that carriers give it a share of call revenue. When the original iPhone rolled out, it was priced real steep and was sold along with equally dear deals with a single exclusive carrier in each country. But inspite of all this, the original iPhone managed to sell 6 million units and for a fact the future of the new 3G versions seems brighter keeping in mind that it is cheaper and also less rigid about its support with network operators.

T-Mobile will sell the iPhone 3G with 8 GB of storage, which will have a capacity of around 2,000 songs or about 8 feature-length movies, for between 1 and 169.95 euros, depending on the data plan selected. On the other hand, the 16 GB version will start at 19.95 euros with a complete data plan costing 89 euros per month, going up to 249.95 euros for a minimal 29 euros-per-month contract.