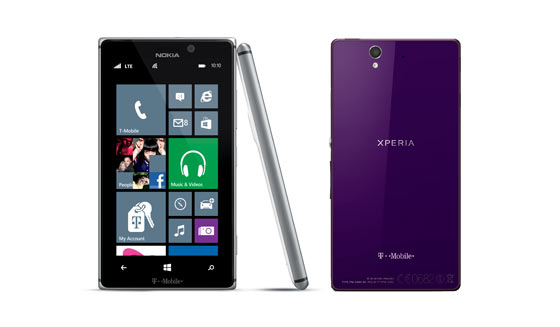 The T-Mobile Xperia Z and Lumia 925 release date details have been published by the carrier. Apart from these 4G LTE devices from Sony and Nokia devices, even the Samsung Galaxy Tab 2 10.1 has been announced to be gearing up for a software update which will grant it the support needed to connect to the carrier’s 4G LTE network.

After shaking up the US market with its ‘un-carrier’ plans, it has now gone on to introduce a Jump program which will enable its customers to upgrade their phones up to twice a year, following six months of enrollment. It has even managed to extensively expand its 4G LTE network across the country by reaching out to more than 157 million people, a fresh announcement confirmed.

Coming back to the devices in question, the Sony Xperia Z and the Nokia Lumia 925 were already affixed with price tags in the past, but were devoid of any information about their arrivals. Today however, it got corroborated that July 17 – that’s tomorrow – will be day on which both will be making their way into retail and online stores of the Magenta carrier.

Those wishing to buy the 4G LTE-equipped Sony Xperia Z and Nokia Lumia 925 may know that both will be available at subsidized rates through the network provider. While the former will be dished out at $99.99, with 24 equal monthly device payments of $20, the Windows Phone-based device will go for $49.99, with the same monthly payments.

Along with this news about the Sony Xperia Z and Nokia Lumia 925, there’s one more announcement that the carrier has made. Its Samsung Galaxy Tab 2 10.1 will be provided with an over-the-air software update, aimed at granting it the capability to access its 4G LTE network.

Both the Xperia Z and Lumia 925 can be bought now through the T-Mobile website, while the former is also available on its manufacturer’s official store for the US. Their deliveries will start only from tomorrow onwards.