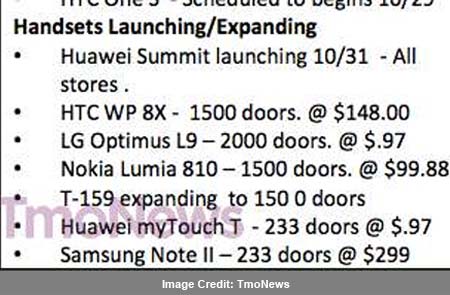 The T-Mobile Samsung Galaxy Note 2, LG Optimus 9 and other Windows Phone 8 devices prices may not have been revealed officially, but they have been leaked through Walmart. Besides the second generation Note and the LG phone, this list features the HTC 8X, Nokia Lumia 810 and Huawei myTouch T.

The leaked information was spotted by TmoNews, who points out that Walmart tags are usually less than the carrier’s. The document that reveals the cost also discloses that the Huawei Summit will be launched on October 31 and will be made available at all stores, perhaps all Walmart outlets. The Note 2 continues to carry the same rate as the Sprint version, which is probably accompanied by a two-year customer agreement and qualifying data plans. 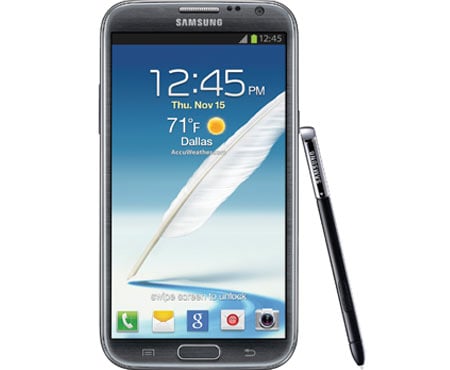 Furthermore, the HTC 8X Windows Phone 8 smartphone will also knock on T-Mobile’s doors and will set users back by $148. Another WP8 device to be released by this network provider is the Nokia Lumia 810 that costs $99.88. There’s Huawei myTouch T for $97 and the latest L series phone, the LG Optimus L9 that will reportedly be made available for $97 through the retailer in question.

The aforementioned Samsung slab will be available from October 25 for $299 and its 16GB version is already up for sale in India for Rs. 39,900. It costs £499.99 through Three in the UK with Pay As You Go plans. The cost of the AT&T version of the HTC 8X is not known and release dates of all of these phones are unclear.

There hasn’t been an official announcement from either T-Mobile or Walmart regarding the leaked prices of the aforementioned devices.