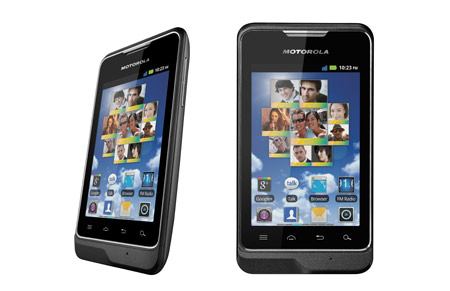 With the unveiling of the T-Mobile Motorola Motosmart UK price and release date, buyers in the region can now look forward to yet another budget Android phone among the lot. This thin device comes fitted with a 3.5-inch display, and strangely enough, runs the Gingerbread OS instead of the new Ice Cream Sandwich software.

The company has highlighted the handset’s organizational abilities that extend the accessibility of its features using the latest version of the MotoSwitch user interface. Said to keep track of traits like the most loved songs, frequent calls and most used apps, this little addition automatically places users’ preferred information on the home screen. Built-in Wi-Fi, Bluetooth and GPS also form part of the device’s attributes.

Victoria McManus, marketing director, UK & Nordics, Motorola Mobility, commented, “Simply put, Motosmart makes life easier. You don’t have to worry about complicated settings and hard-to-follow instructions. Just turn this smartphone on and get instant access to the people and things in your life that matter most.”

The T-Mobile Motosmart has been proffered a 3MP rear camera, while a front snapper doesn’t find a place on the handset. A 800MHz Qualcomm MSM7227 processor and 512MB RAM lie under the hood of this smartphone. While its flash memory details haven’t been revealed by Motorola as yet, it has been confirmed that the device will ship with a microSD card slot.

Like we said, the company has disclosed the T-Mobile Motorola Motosmart UK price and release date details. It will be made available by the end of July at £99.99 with pay as you go plans. Buyers will even be able to acquire it for free on a £7 monthly rental under a 24-month contract.