T-Mobile iPhone 5, 4S no longer free on $0 down promotion

T-Mobile has taken the iPhone 5 and 4S off its summer sale promotion where both smartphone could be purchased for $0 down with 24 equal monthly payments. By the looks of it, the Apple devices are the only ones being dropped from the offer and the carrier hasn’t provided any reason behind its actions. The price change is expected to go live today for both devices.

The carrier is yet to go public about the recent changes. The news broke out through leaked documents acquired by TmoNews, which again, doesn’t provide the slightest idea behind the new (actually old) pricing strategy. The good news in all this is that the aged iPhone 4 is still available for $0 with EIP on the Simple Choice plans. So starting today, you’ll have to shell out $145.99 as a down payment for the iPhone 5 along with a monthly $21 charge for the usual 2-year period. 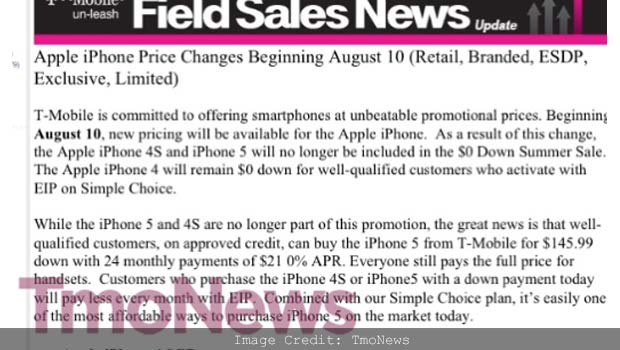 The aforementioned amount is for the 16GB model, while the 32GB version costs $245.99 and the 64GB can be picked up for $345.99. Coming to the iPhone 4S, it’s now priced at $69.99 with the EIP pegged at $20 a month. The Zero Dollars Down promotion was initiated towards the end of July and it makes a host of high-end devices such as the Galaxy S4, Xperia Z, Lumia 925 and HTC One available for free. Well, the monthly payments have been increased to cover up the costs.

The new rates for the T-Mobile iPhone 5 and iPhone 4S apply only when clubbed with a Simple Choice plan which starts at $50 per month with unlimited talk, text and web.