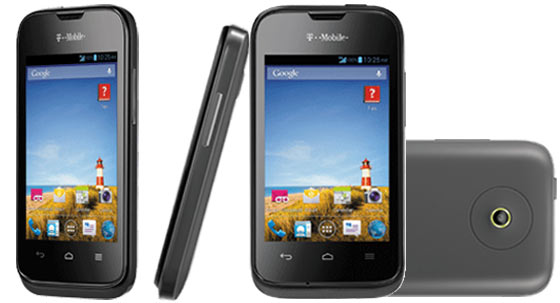 As its moniker suggests, the T-Mobile Huawei Prism 2 is the second iteration of the company’s 3.5-inch device which was unveiled last year and the handset has hopped onto T-Mobile bandwagon along with a price. This low-budget offering by Huawei has gone up on sale through the official online outlet of the carrier, or rather ‘the un-carrier’, against an outright price of $115.99.

Those who have been in the loop will know that the telecom operator has replaced the practice of providing service agreements with its Simple Choice plans for customers who are weary of splurging over high-end smartphones all at once. But it has clearly not limited the scheme to top-notch handsets only, considering that it has included the Huawei Prism 2 under this category as well.

The Huawei Prism 2 brings with it the goodness of Android Jelly Bean version 4.1, but fails to take advantage of the operator’s 4G network owing to its entry-level status, a post on Ubergizmo pinpointed. A 3.2MP camera has been positioned on its rear panel and reasonably, there is no trace of a front-facing lens. The gadget relies on a 1GHz chipset and since nothing has been mentioned concerning the system memory, we believe it houses 512MB of RAM, similar to its predecessor. 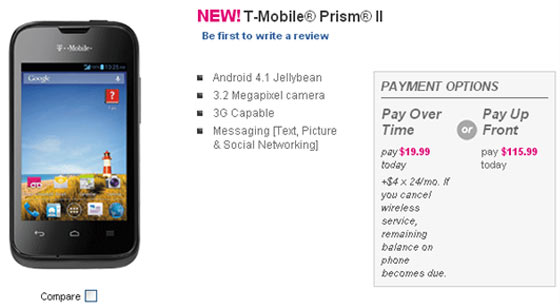 Within the confines of the Huawei Prism 2 which extends as much as 4.6” x 2.44” x 0.49” in dimensions, rests a 1,750mAh battery. According to the carrier’s claims, this power pack should grant up to 7 hours of talk time or roughly 10 days of standby.

The Huawei Prism 2 has been smeared with a price of $19.99 for those who intend to purchase it clubbed with the service provider’s Simple Choice plan, which will be followed by payments of $4 per month for a period of two years.

In short, here is a list of the smartphone’s specifications: