T-Mobile HTC One S price and availability details spelt out 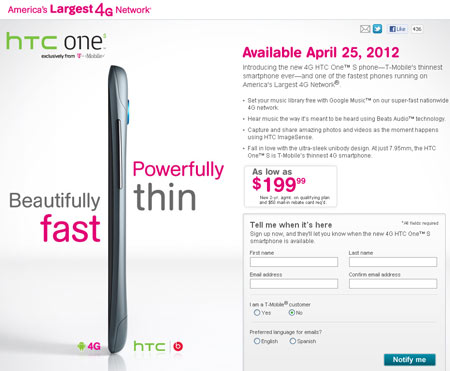 Sometimes rumors just hit the right spot and the previously speculated April 25 release date for the T-Mobile HTC One S couldn’t be more right. The official word confirms that the much talked about smartphone will be hitting store shelves on that very day.

For a quick refresher, the handset dons a 4.3-inch qHD Super AMOLED screen proffering 540 x 960 pixel resolutions, within its sleek 7.8mm chassis. Powered by the Ice Cream Sandwich OS with HTC Sense 4.0, this device is replete with the Beats Audio technology and it will be seen landing on the carrier’s 4G network. Fueled by a 1.5GHz dual core Qualcomm Snapdragon S4 processor, the One S comes with 16GB of storage capacity and hides a 1,650mAh battery underneath its hood.

“The HTC One series is a revolutionary device portfolio and we’re proud to be the first carrier to introduce the HTC One S to the U.S. market,” states Andrew Sherrard, senior vice president of marketing, T-Mobile USA. “With a stunningly thin design that doesn’t compromise performance, the HTC One S is a sleek 4G smartphone with beauty and brains that our customers will be proud to show off.” 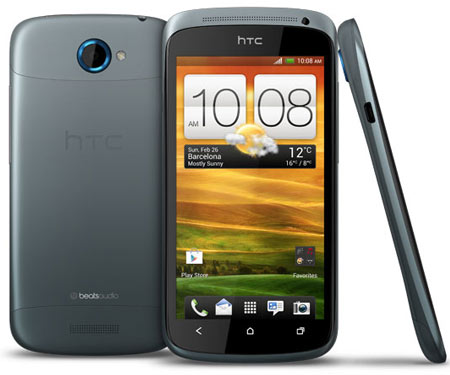 There is a front-facing VGA snapper in the offing, while the rear panel is complete with an 8MP illuminated camera. And with HTC ImageSense on-board, photographers can indulge in snapping up enhanced quality shots as well as recording 1080p full HD videos when on the go. Dipped in a shade referred to as ‘gradient blue,’ the device will come pre-loaded with the title ‘Where’s My Water?,’ for ardent gamers.

The T-Mobile HTC One S price is stamped at $199.99 after a $50 mail-in-rebate with a qualifying two-year contract. As mentioned earlier, it will be available from April 25 for eager beavers out there.