T-Mobile has finally got about to revealing something relating to HTC, the One release date. Although details regarding a price are still out of reach to customers and fans of the carrier, other operators such as AT&T have been able to share this information. It was even made known recently that the device would be coming to Verizon.

A tweet from the official T-Mobile help Twitter account (embedded below) says the company has already announced that the phone will arrive on April 24. But the funny thing is, and as TmoNews notes, the carrier hasn’t actually revealed this information officially. Anyway, this piece of news combined with the recent leak surrounding the network operator can be taken as (almost) official confirmation that the handset will be launched about a week from now.

Getting into specifications, the phone will sport a 4.7-inch display which puts out visuals in full HD resolution and will run on Android Jelly Bean with the manufacturer’s Sense 5 UI. Now that Facebook Home for Android is here, owners who do not prefer the BlinkFeed option can get their lock screens livened up instead.

Other interesting features include the 4MP ‘UltraPixel’ camera with the ability to record Zoes, the two front speakers and the accompanying BoomSound, as well as the unibody construction. Meanwhile, a 2.1MP front-facing webcam should facilitate sharing moments with friends over video chat. 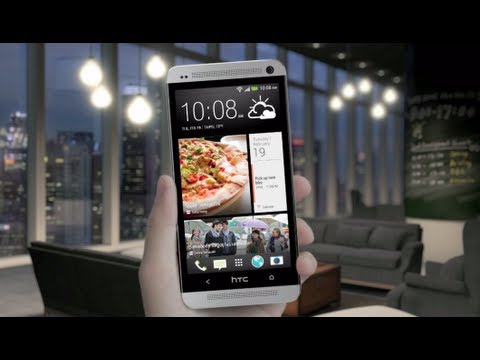 Getting into the more technical aspects, the handset has 2GB of RAM and a 1.7GHz quad core Qualcomm Snapdragon 600 processor for speedy operation. Internal memory choices offered include 32GB and 64GB ROMs, while there is also Bluetooth 4.0 and Wi-Fi, plus LTE, DLNA and NFC wireless options. 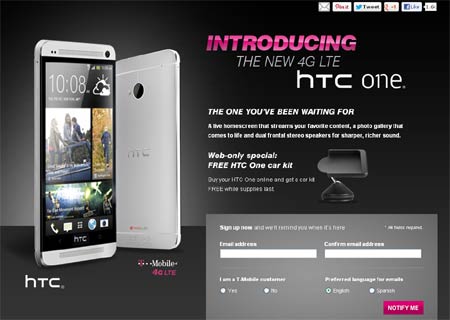 The HTC One will be available on the aforesaid date both online and in T-Mobile’s retail stores. Those wanting to pre-order will be disappointed, but they can sign up to be notified when the device arrives, possibly a result of shipment delays.

The specifications have been listed out below: