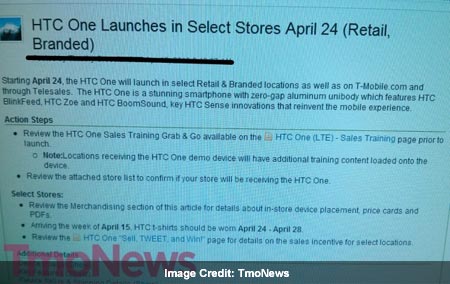 A leaked image seems to have confirmed that the HTC One is coming to T-Mobile with a release date apparently set for April 24. It should be kept in mind that even though the very capable flagship handset has come to a few markets in Europe, Americans are still waiting to get their hands on it. AT&T, for example, put the device up for pre-order about two weeks ago, where it is scheduled to arrive shortly.

The image clearly states that the device is expected in T-Mobile stores on April 24 and even has a few details on training the staff using a demo unit, which is to have additional training content pre-loaded. Also, the document says that HTC T-shirts will arrive during the week of April 15 and mandates that store staff wear said T-shirts from April 24 to April 28.

Let’s talk about the phone for a bit. First up, it comes with the all-new, and very intriguing, ‘UltraPixel’ camera and its ability to record a fresh take on the GIF image, re-labeled the Zoe. The snapper itself packs just a 4MP sensor, but is hailed as being on par with some of the 13MP lenses out there, due to its ability to let in about 300 percent more light.

It’s no surprise that Jelly Bean is chosen as the OS, and this will be layered with the company’s Sense 5 UI, although now that the Facebook Home app has been released, owners will be able to download and apply the launcher for a more connected experience. But that would take away from the phone’s own eye-catching home screen slathered in BlinkFeed, a WP8-like constantly updated feature.

Then there’s 2GB of RAM, options of 32GB and 64GB of internal storage and a 1.7GHz quad core Qualcomm Snapdragon 600 CPU to take care of business. A 4.7-inch 1080p full HD display makes sure that visuals are always clear, while a battery of 2,300mAh capacity keeps the phone alive. On the front is a 2.1MP webcam, but picture-in-picture like on the GS4 and the Optimus G Pro is not possible.

TmoNews claims that if there was any doubt regarding the US release of the HTC One via the carrier in question, this leaked image seems to confirm it. The document also sheds light on a sales incentive for select locations.