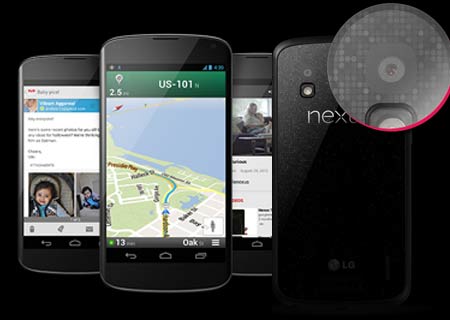 The Google Nexus 4 seems to be high in demand and it is sold out from the Play store and T-Mobile as well. The handset carries the flagship title in the Android ecosystem and it comes with the latest Jelly Bean release which is probably the main reasons behind it selling like hot cakes.

The phone went up for purchase through T-Mobile over a week back, a day after it reached availability status on the Play store. The device has even traveled overseas to the UK where it can be picked up from O2 and online retailer Clove. The smartphone has also managed to reach Indian shores via eBay. In recent news, rumors have been making their rounds that Google is readying a white version of its flagship Nexus. Local carrier TalkTalk, a relative of Carphone Warehouse, recently put up an ad stating that this particular variant will be in stock by mid-December. However, the Mountain View giant is yet to confirm the phone’s existence. 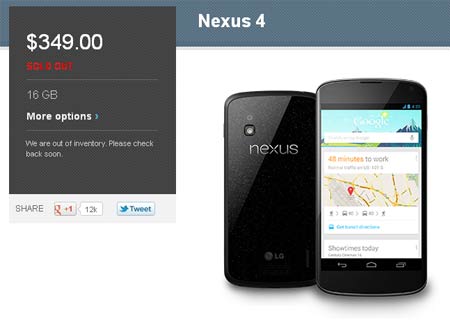 Android Authority points out that the phone went out of stock a few hours after Google started redirecting buyers to T-Mobile’s website. For refresher’s sake, the handset is powered by the Android 4.2 platform and it is manufactured by LG. The device is said to be a modified version of the Optimus G bearing a similar set of specifications as the latter. It founts a 4.7-inch HD display on the front, while the rear shows off a textured design with an 8MP camera. The phone is also one of the few to launch with Qualcomm latest Snapdragon S4 Pro SOC.

The Google Nexus 4 carries a $349 price tag on the Play store which applies to the 16GB unlocked version, while T-Mobile is offering it at $199.99 with a 2-year contract. As stated earlier, the phone is out of stock through both sources. However, those wanting to get hold of the handset could try their luck on eBay. It will charge them a premium though as the device’s costs starts at around $395 for the 8GB option and it goes all the way up to $1,003.83.