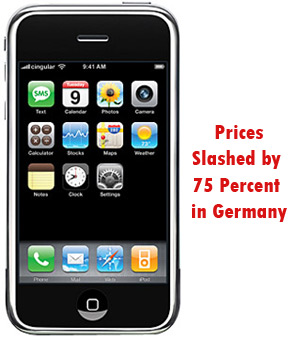 T-Mobile has slashed the price of the iPhone in Germany by quite a substantial amount. The 8GB iPhone version now costs only 99 euros, which means that the device has experienced a 200 euros slump from its original price of 399 euros. Well, Apple isn’t getting generous for no reason. This move is done in anticipation of the new 3G iPhone that is expected to roll out soon.

From April 7 to June 30, the 8GB iPhone will be available in Germany via T-Mobile for only 99 euros along with a bundled two-year contract.

In addition, a starter iPhone contract has also been released that costs 29 euros a month and the handset then costs 249 euros.

However, things remain unchanged for the 16GB iPhone, which still retails at 499 euros with a two-year contract.

The highly anticipated 3G iPhone is expected to launch anytime from May to June. And the latest offer could be to clear existing stocks of the 8GB model, and welcome the forthcoming 3G version.