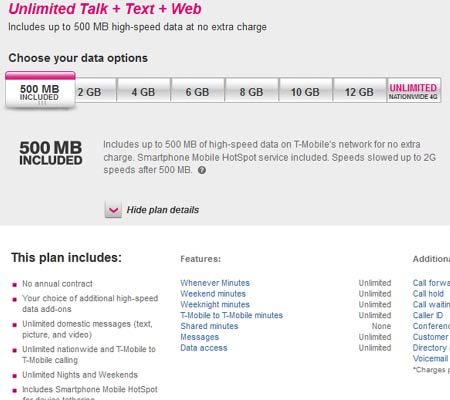 T-Mobile is saying adiós to contract agreements and has seemingly started offering customers its new Value plans sans any commitment. This entire notion started off as a mere speculation, but has now surfaced as a reality owing to the carrier’s official website which denotes the launch of the provider’s new approach.

The latest contract-free Value plans are said to be simplified and they currently start at $50 a month. Each subscription here is said to deliver unlimited talktime (including other carriers and landlines), messages and data across the US. While the first 2 offerings stay true to their name, internet speed on the other hand, will be slowed down after a certain amount of data is consumed. For instance, this fair usage policy provides 500MB of free downloads for the aforementioned amount.

Other data options include 2GB, 4GB, 6GB, 8GB, 10GB and 12GB which come at a $10 surplus charge over the previous choice. This basically means that 2GB can be acquired for $60 ($10 + $50), while the 4GB one comes for $70 ($10 + $60). After consuming a certain amount of data, the speed will be dropped down to that of a mere 2G connection. Each plan tags along free Mobile HotSpot tethering. For those who prefer not being restrained by download caps, there’s an unlimited high-speed subscription that’s tagged at $70 which comes with 500MB of Mobile HotSpot, while other service are acquirable for an additional sum.

These aren’t all; the carrier is even offering each plan sans the need for a device purchase. Those picking up a new smartphone will have 2 options to choose from, namely Monthly Payments and One Payment. The first one lets them get hold of a handset at a subsidized amount with monthly charges, while the second permits picking up a device at full retail value. Android Police points out that this approach will allow consumers to keep track of much they’re spending and they won’t necessarily have to pay more for a phone with a 2-year agreement.

A lot seems to be happening over at T-Mobile. The ‘un-carrier’ approach, which is being used to refer to the contract-free Value plans, is just the tip of the iceberg. The provider is currently in process of merging with MetroPCS and it will also be deploying its 4G LTE network in the US sometime soon.