Father’s Day is right around the corner, and T-Mobile is trying to persuade its customers into gifting a tablet to their dads, by placing a $100 discount on its slates. This deal will stay alive till June 15 and will apply to the Samsung Galaxy Note 10.1 2014 Edition and the Samsung Galaxy Tab 3 as well.

Besides these, the Apple iPad Air and the Apple iPad mini with Retina are also included in the deal. All four of these tablets are offered for free with two-year contracts, so buyers will essentially be getting an off-contract discount of $100. Head over to T-Mobile’s site if you’re interested. 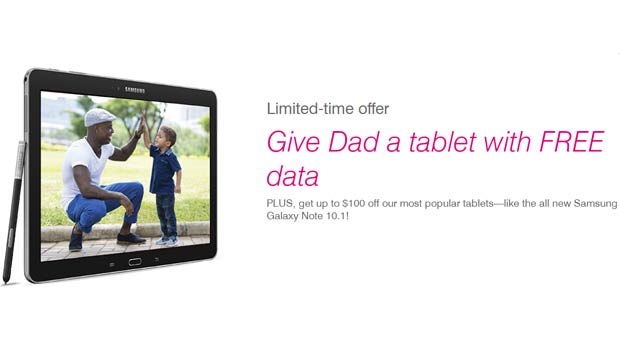 This US carrier has also announced that it will start stocking the Acatel One Touch Pop 7 tablet in its repositories from June 18 onwards. This extremely affordable 7-inch (600 x 1024 pixel) slate will be made available at the low price of $168 by T-Mobile. Described to be a ‘quintessential simple and intuitive Android tablet,’ is grabs a dual core processor clocked at 1.3GHz and runs the Android 4.2 Jelly Bean OS.

The One Touch Pop 7 also benefits from a 2MP main camera and a VGA front-facing snapper. It is 8.9mm thin and weighs in at 285gms. Its processor is granted assistance in its operations by 1GB worth of RAM, while 4GB of storage also forms part of its offerings. For further expansions, there’s a microSD card slot that supports 32GB of additional space.

This announcement of a Father’s Day discount comes straight after Verizon too announced similar deals for its devices. It won’t be long hence to see other carriers too following suit in some way or the other.