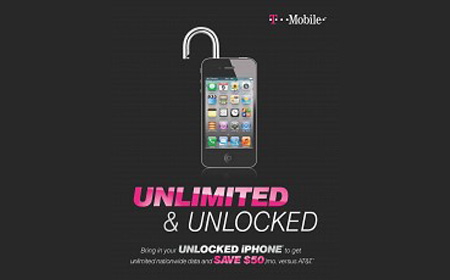 Jumping aboard the ‘Bring your own Device’ philosophy making waves around the globe, T-Mobile will boost its attractiveness to iPhone users who have unlocked devices. This BYOD movement, for phones that is, is a case of West following East it seems, and starting tomorrow, September 12, the carrier will begin rolling out changes to draw in iPhone users to its service.

The wireless carrier has been given the proverbial snub by Apple, but it doesn’t want to be left behind watching the iPhone bandwagon ride into the sunset. Instead a more proactive approach is what it takes. It says it will send a demo unit of the iPhone 4S to all its branded retail stores and begin training its staff to assist customers in setting up their ‘compatible’ smartphones.

Now the reason the network provider says ‘compatible’ is that Verizon and Sprint phones don’t work on the service, while other iPhones may not have complete functionality. Quite the catch. Among the various schemes offered is a $70 per month unlimited talk, text and data plan which is about $50 per month cheaper than AT&T’s corresponding plan, the carrier reckons.

In the meantime, the mobile network operator says it is in the process of developing iOS versions of its own applications including the T-Mobile myAccount, the T-Mobile Visual Voicemail and the T-Mobile TV app. It’s possible that the carrier is taking measures with the iPhone 5 in mind and expects to have its 4G service up and running in time for the device’s supposed launch.