Swipe has a new tablet for the budget-minded, the MTV Slate, which looks stylish and quite alluring on-paper, but there’s just one thing that bothers us. The device is more or less identical to the iPad mini where appearance is concerned, albeit there are a few places where the company’s has incorporated its own take on the design.

Most notably, the Swipe MTV Slate has voice calling capabilities which are made possible through the earpiece fixed above the display and the SIM card tray that supports 2G and 3G WCDMA networks. Speaking of which, the slate also features Wi-Fi 802.11 b/g/n, Bluetooth 4.0, GPS and FM radio. The device falls in the same category as the Simmtronics Xpad Mini which also carries a 7.85-inch IPS touchscreen proffering 1024 x 768p resolution. The Swipe MTV Slat, however, has a slightly faster processor, a 1.2GHz MTK 8389 with quad ARM A7 cores. 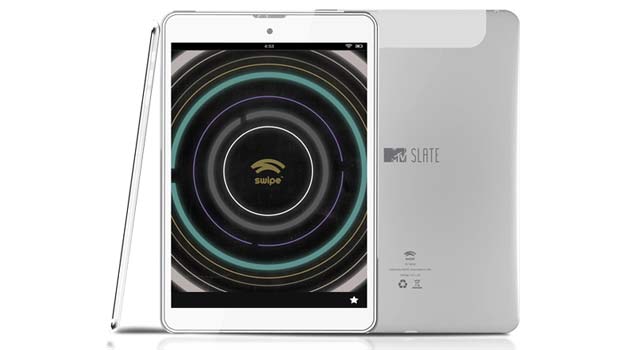 The Xpad Mini isn’t the only competitor the device will have. The Nexus 7 is all the more affordable now at just around Rs 11,000 for the 16GB model. Complementing the Swipe MTV Slate’s processor is 1GB of DDR3 RAM, while storage needs are taken care of by 8GB of flash memory. There’s a 5MP camera on the rear and a 1,3MP snapper on front. Where dimensions are concerned, the tablet measures 200.5mm x 135mm x 8.4mm and it weighs 400 grams. Lastly, a 3200mAh battery delivers the juice.

The Swipe MTV Slate has been launched in India for Rs 14,999 and it is up for pre-order through various online retailers.