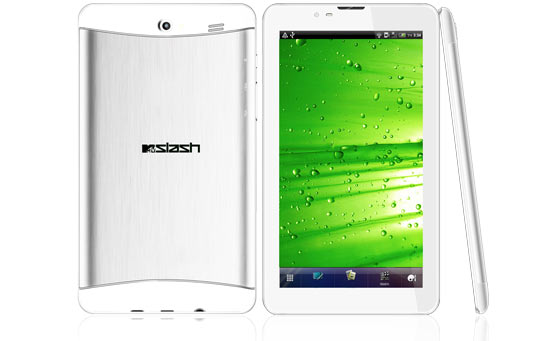 The Swipe MTV Slash was launched yesterday by the two companies in India, and this 7-inch voice calling tablet has been blessed with a price tag of Rs 9,490. It comes equipped with the Android Jelly Bean 4.1.2 OS, and bears a number of software attributes that go on to demonstrate the Swipe MTV branding. It is available on Snapdeal at the moment, and is scheduled to be dished out by other retailers soon at the same price tag.

The 7-inch screen on the tablet grabs hold of a 1024 x 600 pixel resolution, and above this display, rests its earpiece which facilitates voice calling. Since it bears the branding of the youth-focused television channel, its design too has been modeled along the same lines. Moreover, the tablet has been loaded with pre-loaded apps of the channel.

The 1GB DDR3 RAM has made its way into the Swipe MTV Slash, and this slab is run by a 1GHz dual core processor. It also features dual SIM card slots, while its internal memory has been locked down at 4GB. Additionally, it even bears a microSD card slot capable of expansions of up to 32GB. Its dual camera setup includes a 5MP rear snapper and a 0.3MP front webcam.

Sized at 108mm x 9mm x 188.4mm, the Swipe MTV Slash tips the scales at 290 grams. It carries inside it a 3,000mAh battery, while essential connectivity traits like Wi-Fi, Bluetooth and more gain spots in its interior as well.

As mentioned above, the MTV Slash is being sold now at a price of Rs 9,490 by Snapdeal. It is expected to hit other e-retailers soon.