Not surprisingly there’s an LG G Pro 2 Lite, and FCC has just passed it

If a big phablet is released by a company, the launch of its smaller version is imminent these days, and it’s hence that this leak about the existence of the LG G Pro 2 Lite doesn’t surprise us. The FCC has just passed this device for Verizon, but as past leaks have suggested, it will also be headed to AT&T and Sprint.

My LG Phones was first to peer at the FCC documents which have given away crucial details about the handset. While its larger cousin features a 5.9-inch display, this Lite model is going for a slight downgrade by grabbing a 5.7-inch panel. However, there are no changes in the battery department, as the new version too features a 3200mAh power unit. 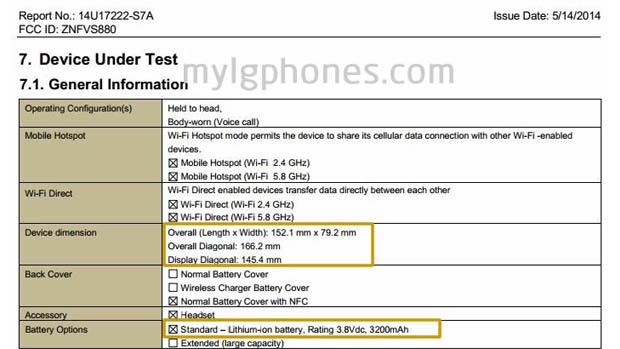 This LTE device will most probably display its visuals in 720p HD resolution. It will moreover, grab an 8MP camera on its rear surface instead of the 13MP shooter of its parent device. 1GB worth of RAM, 8GB of storage and 32GB expandability are also being said to form part of the LG G Pro 2 Lite.

It will moreover, be fueled by a MSM8926 Snapdragon 400 chipset which is far less advanced than the original phone’s Snapdragon 800 SoC. The question that now remains unanswered is what kind of a price tag the LG G Pro 2 Lite will be granted. We’ll have to wait and watch for that.

Here’s a neat look at the possible specs of the LG G Pro 2 Lite: