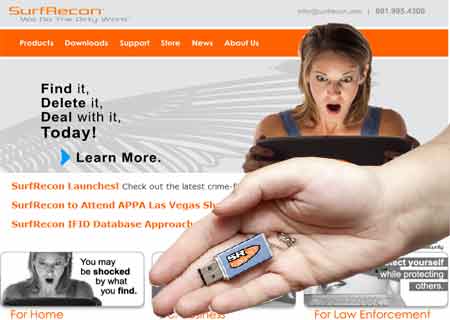 SurfRecon Inc., has launched something that most of the parents, law enforcers, employers must have wanted- a tool to detect pornographic content. SurfRecon 2008, launched by the company is an application installed in a thumb drive can do all the dirty work bringing to light the hidden material. Since it comes as a thumb drive, it is highly-mobile and easy to use.

“We have always felt strongly that parents, employers, and especially members of law enforcement needed a simple tool that would find pornography on a suspect computer. With SurfRecon, they have that tool,” said Matthew Yarro, VP of Marketing for SurfRecon, Inc.

The application searches for the pornographic content controlling millions of hash values or digital fingerprints, working differently than how filters and firewalls do, claims SurfRecon. “With nearly 100 million image hashes in the database and with another 4 million added per week, if a computer contains pornography, SurfRecon will find it,” said Andrew Brandt, SurfRecon Director of Business Development.

The tool is capable of scanning any Windows, Macintosh and Linux computer systems and as many as other devices that can be connected to the computer, like the DVDs, CDs, iPods, cell phones, USB drives, external hard drives, etc. It does not passively block access, running in the background, it can actively detect that someone has been using the pornographic content. “If we can detect it, we can likely categorize it for you. Depending on the speed of you computer, SurfRecon can analyze thousands of images in only a few minutes,” said Mr. Yarro.

The product highlights are SurfRecon’s safety tool features. SurfRecon features ‘blur’ and ‘Digital Keyhole’ tools which the users can use to blur the dark material and use the keyhole to limit the exposure. “We feel SurfRecon’s safety features are some of the most important features the tool has to offer individuals who review pornographic content,” said Mr. Yarro, “They need something to protect their mental health, because some of the harder forms of pornography out on the Internet are so toxic and disturbing, they are going to harm you. It’s unavoidable.”

According to Mr. Yarro anyone who needs such a tool can use the SurfRecon 2008. “Anyone who is dealing with a curious teen, wandering spouse, or convicted molester needs this tool.

“We have always felt strongly that parents, employers, and especially members of law enforcement needed a simple tool that would find pornography on a suspect computer. With SurfRecon, they have that tool,” said Matthew Yarro, VP of Marketing for SurfRecon, Inc.

The adult content detector tool is already being used by police, adult probation and parole officers, and federal agents all over the world. “I was excited to finally have a tool I could use to quickly search computers in the homes of my probationers,” said Cole Christensen, Adult Probation and Parole Officer, Utah State Department of Corrections, “And guess what? The first time I used it, I found pornographic content. Images I wouldn’t have found normally.”

Now the parents, community leaders, employers, just about anyone can use the technology which is available at retailers, in three versions – Home edition, Business Edition and Elite Edition and priced at $99.95, $499.95, $499.95 respectively, with 1 year subscription. The SurfRecon 2008 is also available online on www.surfrecon.com.