Surface with Windows 8 Pro price unveiled, aims to be available in January 2013 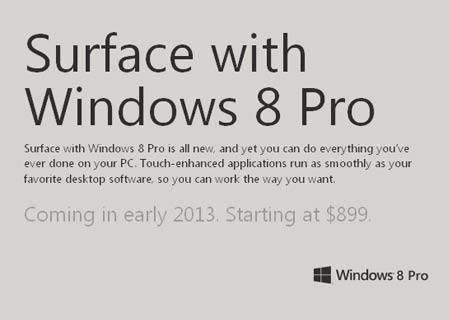 The price of the Surface with Windows 8 Pro has popped out of hiding and Microsoft’s launch plans seem to be in sync with the previously disclosed information. Come January 2013, potential buyers will be able to take a shot at owning the Redmond giant’s home-brewed hardware for a starting cost of $899.

A post on the official Microsoft blog states that the difference between the Windows 8 and Windows RT versions of the tablet are minimal, appearance-wise. Both slates incorporate a kickstand and they are dressed with a dark titanium VaporMg casing which is designed from molten magnesium alloy and is claimed to be 3 times lighter than aluminum. What’s more, it has a durable exterior and an anti-fingerprint coating. The Surface with Windows 8 Pro weighs a tad more than its ARM-based sibling and it is even on the thicker side, measuring 13.5mm in depth. The front dons a 10.6-inch ClearType full HD display with an aspect ratio of 16:9. Tucked away in the inside is a Core i5 processor coupled with Graphics 4000 from Intel and 4GB of RAM amongst others. Users will have a full-size USB 3.0 port for hooking up peripherals, a Mini DisplayPort for connecting external screens and a microSDXC card slot. This slate is capable of running current Windows 7 desktop applications and it even renders access to the Windows Store.

The Surface with Windows 8 Pro is expected to be launched in 2 options this January. The first one will hold 64GB of storage and carry an $899 tag, while the second choice will be available for $999 with 128GB of integrated hoarding capacity. The aforementioned costs also cover the pen accessory that features Palm Block technology. The tablet is said to be compatible with the Touch Cover and Type Cover. Both accessories are sold separately for approximately $119.99 and $129, respectively. 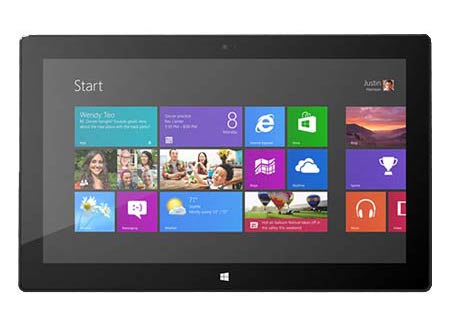 Technical specifications of the Microsoft tablet are as follows: