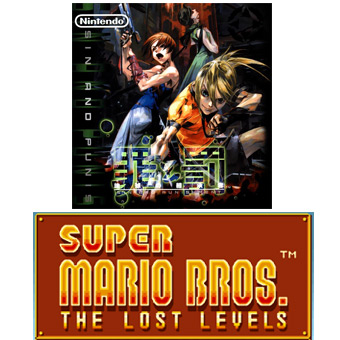 This week Nintendo Wii owners in US get to enjoy games that have never been available in the Western Hemisphere on their original platforms. Giving a superb blast from the past are Super Mario Bros.: The Lost Levels and Sin & Punishment, which are the latest game titles that will be hitting the Wii.

Read on to relive both the games:

Super Mario Bros.: The Lost Levels: (NES 1 player) This game was first released in 1986, in Japan and called Super Mario Bros. 2. for the Famicom Disk System. The game is very similar to Super Mario Bros., both graphically and also in terms of gameplay, and is generally considered the most difficult game in the NES leg of the series. Now available on the Virtual Console, Mario fans will appreciate the familiar look and feel of the game, while finding that its updated game play creates a completely new challenge. No longer content just to wear different-colored overalls, Mario and Luigi also possess different skill sets: Mario can stop quicker, while Luigi can jump higher. Along with the classic enemies already known to fans around the globe, there are also Poison Mushrooms, backward Warp Zones, and the occasional wind gust (which can help or hinder your progress) to take into account. And if that’s somehow not enough, expert players can go looking for the game’s secret worlds. So get ready to put your Mario skills to the ultimate test, and save the Princess again and just don’t be baffled to find her in another castle.

The next game is Sin & Punishment (Nintendo 64, 1-2 players); a 3D third-person shooter game has been created by the legendary development studio Treasure. It is one title that hard-core gamers and fans of Japanese imports recognize as one of the finest Nintendo 64 titles to have never previously reached North American shores. It has a unique combination of English voice-overs with Japanese subtitles (preserved in this version) that further adds to the enthusiasm for its final release here. Gamers get to experience the frantic pace of a classic shooter, while choosing from a range of options and a number of different skill levels until you are ready to take on the full-blown challenge of Turbo Hard mode. Gamers play the role of a young resistance fighter facing an assault of bio-genetic monsters called Ruffians. These Ruffians were initially bred to develop the falling food stocks on Earth, and have turned against their creators and are trying to take over! Gamers will have to battle their way across land, sea and skies collecting energy, time and point bonuses as they go.