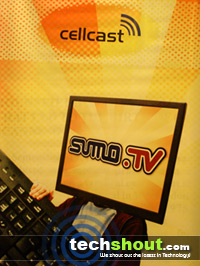 Cellcast Interactive India, the Indian arm of the UK-based user generated content (UGC) providers, today announced the launch of Sumo.TV in India. Sumo.TV is a medium for anyone who makes video content and wants it to be showcased to a huge audience. It is similar to YouTube and MySpace, but where it truly standouts is that in Sumo.TV users get a chance to broadcast their content on TV. It lets people have their 15 minutes of fame.

Mahesh Ramachandra, VP, Cellcast said, “Sumo.TV invites individuals to share their personal or creative videos that could be featured on prime time television. In fact, in the UK market we have started a 24-hour channel with the content contributed solely by viewers. This exceeds what even YouTube or MySpace can provide for their communities.”

“UGC reflects a fundamental change in audience behavior, especially in the 18 – 34 age groups in India where most of them are spending time online or on mobile creating and sharing their own content. Sumo.TV offers them an outlet to share their content with millions through the power of television,” stated Pankaj Thakar, CEO, Cellcast Interactive India.

Sumo.TV was launched in UK in September 2006 and has received tremendous response there. Cellcast hopes to emulate this in India too, however as of now they will have tie-ups with other TV channels in India to broadcast user generated shows for half-an-hour to one hour. They will decide to introduce a 24-hour channel after three months as soon as they collect Indian content. They will be focusing on local content and Cellcast has also launched three contests where users who upload videos stand a chance to win Rs. 1, 00, 000 each. The contests are:

Along with the contest, Sumo.TV has an India specific website known as Sumo.in, where the interface is in Hindi. Also, the tags which are included with the videos are automatically translated into other languages. Users can also create their own channels and play lists that are editable. Cellcast also plans to introduce video editing tools so budding directors can just shoot a video and upload on the net. This will save them time as well as software hassles. They also plan to provide royalty-free music for the videos. They will also broadcast some rare and exclusive material from the 50’s.

Sumo.TV is also available in WAP and this will allow mobile users to upload and download videos. In India, as of now you can use GPRS to access the website, but later everything on the website can be accessed using 3G.

Sumo.TV has operations in 15 countries in Europe, Middle East and America and soon plans to launch in China. Though they will showcase local content everywhere, all the content from all the countries will be accessible to everyone on their site.