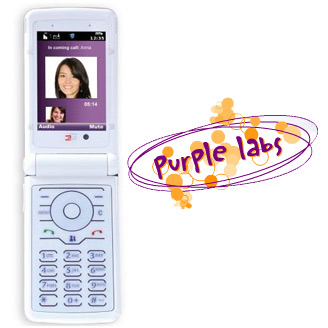 NXP Semiconductors together with Purple Labs has released Purple Magic, a 3G Linux-based mobile phone that offers video telephony, high-speed Internet browsing, music playback and video streaming. The best part is that this phone carries a price tag which lies below $100.

According to figures released by the GSA mobile industry trade group, there are around 197 commercial 3G/WCDMA networks in 87 countries. However, the adoption of 3G services is mainly concentrated solely in the mature European and Asian markets. This is because the commercial viability of 3G services in emerging markets requires large volumes of cost-effective, data-capable devices. The Purple Magic design has been specially optimized to meet this market challenge.

The Purple Magic phone serves as a reference design for phone manufactures that are creating entry-level 3G handsets. This includes those manufacturers targeting key mobile markets such as Southeast Asia, Eastern Europe and Latin Europe.

According to Simon Wilkonson, CEO of Purple Labs, “During the recent holiday period, mobile operators were purchasing entry-level 3G phones for $120 to $145. Leveraging our Linux technology, the Purple Magic design now enables manufacturers to deliver compelling 3G products at a transfer price below $100.”

The Purple Magic phone will be showcased at the Mobile World Congress that will be held in Barcelona, Spain from February 11-14, 2008.

NXP believes in Linux as the basis for the next generation of mobile handset innovation. We’ve been working closely with Purple Labs to develop Linux-based mobile terminals that meet the cost and performance requirements of the mass market. Our joint achievement is to bring the advantages of an Open OS environment to the mass market based on industry-leading silicon and software,” said Dan Rabinovitsj, Senior Vice President and General Manager, Cellular Business, NXP Semiconductors.