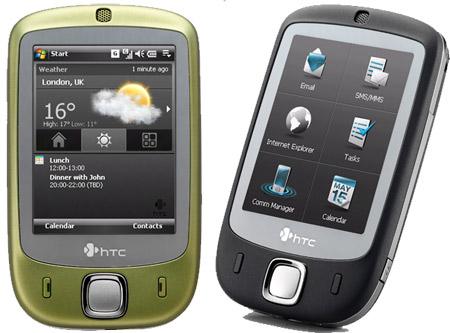 Today, HTC announced the global launch of its small and stylish mobile phone called the HTC Touch which incorporates the new and innovative concept of the intuitive touch screen navigation.

According to HTC, the new HTC Touch phone offers a unique way of controlling touch screen-based devices by recognizing and responding to the sweep of a finger across the screen. Sp intelligent is this phone that it is able to differentiate between a finger and stylus input, after which it responds accordingly.

This touch screen technology found only in the HTC Touch mobile phone is called TouchFLO. When users sweep their finger over the display, an animated three-dimensional interface comprising three screens- Contacts, Media and Applications, pops up.

The HTC Touch phone has a good balance of professional as well as entertainment functionalities.

Besides, this phone has a 2.0 mega pixel CMOS color camera. It’s 2.8-=inch LCD touch screen with a backlight makes pictures look absolutely brilliant with the 240 x 320 dots resolution with 65,536 colors.

Listed below are the features of the HTC Touch mobile phone: