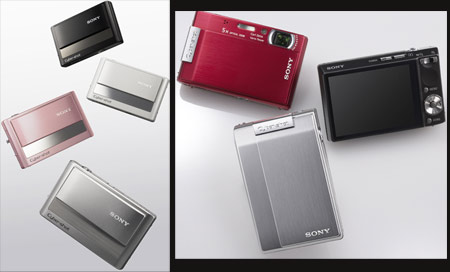 Sony will be introducing a line of very slim and stylish digital cameras that are aimed mainly at the fashion, art and party world. The new Sony Cyber-shot T-series digital cameras include the 8 mega-pixel DSC-T100 and the DSC-T20 models. These cameras are less than half an inch thick and can easily be slipped into a bag, pocket or purse.

The Sony Cyber-shot T-series of digital cameras are equipped with a built-in slide show function, allowing users to play back images together with dynamic transitions choreographed to music clips. Another great feature of the T-series is the cover that slides over the lens, protecting it to a great extent. One can shoot around 380 shots at a go using the T100 camera and around 340 shots using the T20 model.

Besides, the Sony Cyber-shot DSC-T100 and the DSC-T20 models incorporate Sony’s new Face Detection technology. Other features include Sony’s Super Steady Shot optical image stabilization that takes care of camera shake, stabilizing images so that one can shoot easily with longer exposure times. Users can also shoot at higher shutter speeds without using the camera’s flash, due to the high light sensitivity of up to ISO 3200. Lastly, the T-series from Sony also feature Sony’s Clear RAW noise reduction technology that helps to reduce the picture noise common to low-light exposures.

Both the Sony T-series digital cameras are compatible with the Sony VMC-MHC1 HD component cable. You will thus be able to view your photos on an HDTV with ease. Moreover, these cameras can also be connected to the new Sony CSS-HD1 high-definition Cyber-shot Station which comes bundled with a component cable and a remote commander. The station also doubles as a charger for the camera.

Just like the newly launched Sony Cyber-shot W-series, the T-series is also powered by the Bionz processing engine. This helps in the deliverance of fast image processing speeds that are needed to produce color-rich, detailed pictures for true high-definition photo viewing. Besides, this processor also speeds up the cameras’ response times and extends battery life as well.

The Sony Cyber-shot T100 digital camera will ship in March and will cost around $400. The T100 model is available in red, black and silver. The T20 digital camera will be available from April onwards for a price of $330, and will be available in pink, white, black and silver. A matching camera case in colors such as red, green, pink, grey, crème, brown and black is available to protect the cameras. However, these will come at an extra cost.