Hello everyone, I am the author from papercheap.co.uk and my son who is a college student celebrated his 20th birthday last week. This date was very important for him, so I decided to make a present: to build a gaming PC of his dream.

His old gaming PC was bought back in 2014. It was a budget system powerful enough to play 2013-2014 titles in 1080p resolution on medium-to-high graphic settings. But it had a low-end dual-core processor and a mid-range GPU, so the performance wasn’t the best even at the moment I bought it.

So, the gaming PC you’ll see below in this article was assembled while taking into account the 1080p monitor we already owned. Notice that we spent the budget of 1200 bucks only to get the PC itself. I do not include the cost of peripherals (keyboard, mouse, headset, etc.) and a licensed OS into the price list.

By the way, did you know gaming is a perfect topic for essay writing? If you need to make some writing on any topic for a high school, college or university, but feel that you don’t have enough time or motivation, just visit the website I linked above and say “write my essay for me”. There you can solve all your problems with writing.

Now, before I tell about our gaming PC, I would like to remark one thing: we did not aim to build the most cost-effective rig as our wallet allowed choosing from a wide range of hardware components. I know that some parts are kind of “overkill” gear and it was possible to replace them with cheaper alternatives in this particular system, and so on. But this was my and my son’s choice, and I’ll try to explain reasons why we decided to pick these exact parts without saving/adding money on them.

CPU in the PC Gaming Rig and More

We built our previous computer on the Intel Core i3 processor, so the “blue” CPU was the first candidate to become the heart of the new system, too. It was the Core i5-8400, but the final choice was different. I looked at the AMD Ryzen platform after my son decided to try himself in computer graphics and video montage in addition to regular gaming. CG rendering and content creation software is optimized to utilize CPU cores and threads more effectively than most of modern games, so we chose the 6-core 12-thread processor – AMD Ryzen 5 2600.

The additional advantage of this CPU was the price. Despite having two times as many threads as the Core i5-8400, the Ryzen 5 2600 had its const lower: $170 against $200. We evaluated this choice during a plenty of time, and knew that we sacrifice some gaming performance to get huge profits in rendering. In my opinion, the decision was worth it. AMD Ryzen 2600 made our system not only the optimal price-to-performance choice in PC gaming, but turned it into a universal rig possible to use it in many different purposes without losing in comfort and speed.

Why didn’t we add 25 dollars to get the 2600X then? Well, comparing 2 versions of this Ryzen CPU, the overclocked X-version would provide us with additional 200 MHz of frequency (3.6 GHz vs 3.4 GHz). I think that 6% of additional performance is not worth 15% of a price, especially if to take into account the cooler and the motherboard we chose aiming to overclock our usual Ryzen 5 2600.

And the last “pro” argument was the AM4 platform itself. The s1151v2 socket offered by Intel will not get new CPUs in future: the hot and pricy 9900K is the most advanced solution in our days, but Intel doesn’t plan to give users future generations of processors fitting to the same socket.

AMD AM4 will definitely get one more upgrade this summer. Yes, there will be just refreshed Zen CPUs, but there are rumors about additional cores and threads coming with higher frequencies. In any case, this socket is good enough today and has big upgrade perspectives in future.

CPU Cooler in a Gaming PC 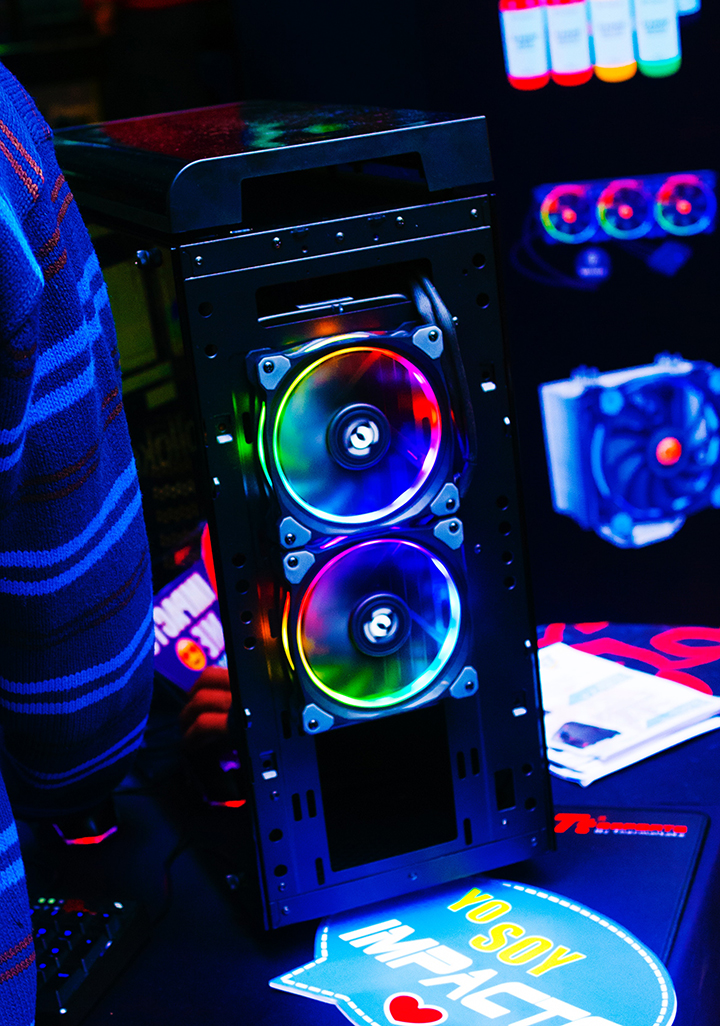 We chose the Dark Rock Pro 4 by “be quiet!” Let’s make it clear. Yes, I know it is an absolute overkill for the chosen CPU. I know it is not cost-effective in our case, and I know that we overpaid a decent sum of money to buy this cooler. But what matters in our case with a windowed gaming PC case: it looks great. Also, it is able to keep the overclocked Ryzen 5 [email protected] GHz cool, and its vent works very quietly. The only disadvantage I noticed: the cooler was a bit difficult to mount it to the AM4 CPU socket.

Here we picked Asus Prime B450-Plus because of its B450 chipset and good enough VRM radiators (matter in CPU overclocking), 4 RAM slots (matter in the future upgrade of rendering abilities) and the M.2 interface support (matters in comfort properties). We didn’t go after the X470 chipset motherboard: there is no need to buy its advantages we aren’t going to use at home. The good B450 board was just fine.

The standard ATX form-factor might be too large for someone, but it was OK to my son. Though he doesn’t plan using the second PCIe-x16 slot to build the 2-GPU subsystem, there is a sound card and a fast PCIe Wi-Fi module we transplanted from the old computer. Additionally, there is no space limitation in his room, so he just wanted to have a large and good-looking PC for gaming.

There never can be too much RAM in your PC. Still, we decided to set that dual-channel “good enough” option in our case and chose two 8 GB 3200 MHz Crucial Ballistix Sport AT modules. 16 gigabytes of RAM are fine in 2019, and our motherboard carries 2 additional slots to add some memory in future (the MB supports up to 64 GB). And I bet gamers know why we chose RAM modules with such high memory frequencies: AMD Ryzen CPUs can operate significantly better with fast RAM solutions.

As a result, we’ve got it all at once: maximum RAM frequency backup to our R5 2600 possible with this motherboard, enough memory volume for now, and a future-proof upgrade option. Not a bad choice for 100 bucks.

In our case, this point includes two options: a standard need in an average hard drive and a will to get the most comfort. To get the regular storage, we took the most common and popular 3.5” disc: the Western Digital Caviar Blue 1TB HDD with 64 MB of cache and 7200 RPM. It is enough to store most games, movies, music, college projects, video footage and anything else.

And the chosen SSD in our gaming PC might confuse most readers, because it is the Samsung 970 Evo M.2 drive with 500 GB capacity. Yes, we understood it costs 150 dollars when picking it. But it is the NVMe solid state drive by Samsung with the V-NAND memory. We found its cost as a payment to get the ultimate comfort, speed and durability it brings to the computer. If you like competitive games (Rainbow Six Siege, Overwatch, APEX Legends, etc.) then the speed of your physical memory will have a noticeable meaning in your online experience.

The GPU, or the video card, is the most expensive and critical part of the gaming PC build. To get enough 1080p performance and to have some high-end features and possibilities at a moderate price, we chose the 6 GB video card: MSI GeForce RTX 2060 Ventus. The top RTX solutions by NVidia (2070, 2080 and 2080Ti) are severely overpriced nowadays, while the 2060 option gives you the level of the past-gen 1070Ti despite of a smaller memory bank (due to the GDDR6 type used) and the entry-level access to the real-time ray tracing technology by NVidia.

Those who don’t want to pay unnecessary costs to get access to RTX features but needs a high-end 1080p gaming solution can pick GTX 1660Ti. People who want to get the most balanced price-to-performance GPU can consider Radeon RX 580 or GTX 1070: these are past-generation cards but they are still capable of providing you with excellent gaming experience at above 60 frames per second in 1920×1080 display resolution.

We aimed to pick the reliable modular PSU into our gaming PC. The 550W SeaSonic Focus Plus Gold power supply unit suited our needs perfectly. It has the 80+ Gold certification, all the necessary kinds of protection and voltage stabilization, and is fully modular. Stock cables are all black and fit our color palette of the PC interior.

As for me, this PSU will serve us a lot and move from one system to another for years.

The Case to Build a Gaming PC

The case is always a matter of one’s taste. As for me, the white NZXT H500 case picked by my son is too dull and minimalistic in terms of exterior design, but it suits him and his room interior perfectly, and what is more important: he likes it.

The case is made of good materials (steel and tempered glass only), has nice cooling properties, two stock ventilators added by the manufacturer (though they’re a bit noisy and better to be replaced ASAP), perfect cable management options and has enough inner volume to carry the Dark Rock Pro 4 CPU cooler with no problem.

There are many cheaper and more expensive gaming PC cases to consider according to your tastes, interior styles and budgets.

Costs for Building a Gaming PC

This is the price list of our best gaming PC ever built: