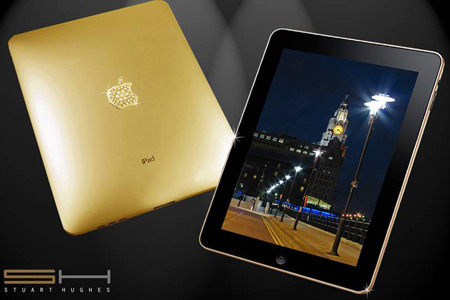 We’ve seen Stuart Hughes bestow its luxurious blessings on a number of gizmos in the past including the iPhone 3GS. The company obviously couldn’t have left out Apple’s most recently launched iPad from the extravagant gadget list. Yes Stuart Hughes slides the covers off what it claims to be the world’s first solid gold and diamond iPad namely the iPad Supreme Edition.

Designed in Liverpool U.K. by Katherine Hughes, this fancy device has been tailored for elite individuals. Users can look forward to the iPad being plated with 25.5cts of ‘I’F’ Flawless diamonds. A stunning total of 53 individually set sparkling gems are housed enticingly in their solid 22ct Apple logo.

The sparkle doesn’t seem to end at that. The rear and the surrounding area of the screen are fashioned from a sole piece of solid 22ct gold, tipping the scale at 2100gms. This opulent iPad seems to be indulgent even down to the precise polishing where it exhibits a harmonious appearance.

The company further reveals a unique blending in of advanced technology with unmatched craftsmanship. A Wi-Fi and 3G version of the iPad with 64GB capacity is the exact one on offer. Like most of the devices the company embellishes, this iPad too will be a limited edition with only 10 units to be made.