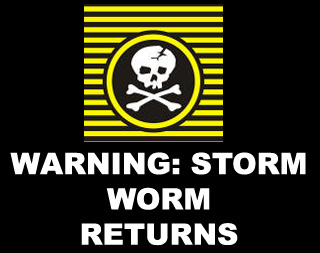 The Storm Worm has returned. This email virus, which first attacked in January 2007, tries to trick recipients into opening an executable attachment file that can hijack their computers. Security companies have said that Storm Worm has managed to quickly drive global virus levels 60 times higher than their daily average.

Security firm Postini has said that the reported increases were based on the compilation of over 2 billion messages per day!
According to warning notices from Postini as well as VeriSign, which also has been following the threat, Storm Worm can be installed by clicking on the email executable attachment file which installs a rootkit with anti-security measures that mask the malicious software’s presence from virus scans and shut down security programs that may be running.

Once installed on a personal computer, Storm Worm takes control of the machine by adding the infected PC to a “bot army” of compromised computers that are connected to a custom peer-to-pear network where it can download new updates, upload personal information from the compromised computer, and scan e-mail addresses to send out spam to further the attacks.

The current Storm Worm spree began around 3 a.m. PDT on Thursday. Initially, the messages contained subject lines including the word “love,’’ urging the users to click on a file attachment, which would install the virus. But soon, the subject lines began to mutate, giving users the impression that an e-mail was being sent by a technical support group helping them avoid a virus. The names and size of the virus file also mutate as e-mails were passed from person to person.

John McDonald, head of antivirus firm Symantec’s Asia-Pacific security response unit, says the virus hides behind a password because this stops it being scanned by antivirus software.

The infected computer can hardly be notice. To the user of an infected PC, “it appears as if nothing has happened,” said Adam Swidler, senior manager of solutions marketing at Postini.

The virus can be detected by up-to-date antivirus software. Its spread can be control by most Internet providers using up-to-date virus filters. These filters should stop it before it reaches inboxes.

However, the best solution to avoid serious trouble, said Swidler, is to delete any e-mails with subject lines that refer to the worms or the word love. “Definitely don’t click the attachments,” he added.