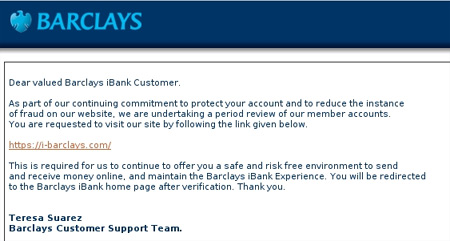 Beware, the infamous Storm Worm is at it again! Only four days into the New Year 2008, we had reported about the return of the Storm Worm which posed as a ‘Happy New Year’ greeting. Now, Fortinet researchers have warned that this malicious code is currently at the cord of phishing activity specifically targeting customers of Barclays Bank.

The peer-to-peer Storm Worm botnet has been widely recognized as the largest and most active and not to forget the most resilient network of infected “zombie” computers.

Known for massively spreading stock spam, also known as “pump ‘n’ dump spam, the Storm Worm Botnet is known for being notorious for these very scams. In fact, there has been a lot of speculation as to how cyber criminals were going to use the threat this year. And, without hesitation, the answer has already arrived.

The involvement of the Storm Worm in bank phishing now marks a milestone in ths Botnet’s evolution.