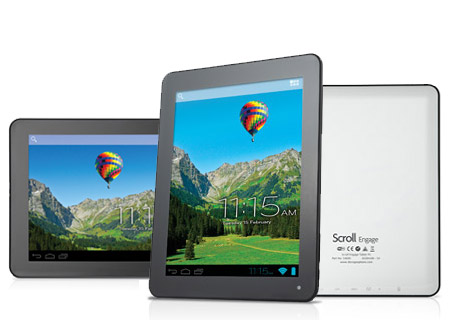 A certain UK-based manufacturer recently updated its 2012 tablet lineup through the launch of the Storage Options Scroll Elite and Scroll Engage devices. These Android 4.0-powered slates are feature-filled and affixed with budget-friendly price tags.

Fitted onto the Scroll Elite is a 9.7-inch capacitive IPS multi-touch screen proffering resolutions of 1024 x 768 pixels. Powering up this slate is a 1.2GHz Cortex A8 SOC which employs a dual core Mali-400 graphics processor. 1GB of DDR3 RAM is employed for enhanced multitasking, while 16GB of integrated flash storage caters to hoarding requirements. A microSD card slot can further expand the capacity up to an additional 32GB.

Paul Evison, head of brand for Storage Options, commented, “We have been busy working to enhance and extend our tablet offering since the launch of the first Scroll around 18 months ago. We wanted to be able to offer our customers a range of devices of varying sizes, features and pricing options on the latest Android operating system and I think our offering is one of the strongest on the market in this respect.” 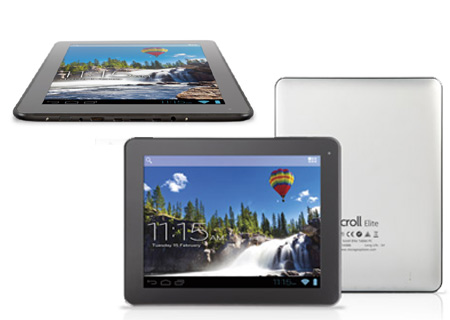 Similar to the Scroll Elite, the Scroll Engage slate also encompasses a 1.2GHz Cortex A8 SOC with a Mali-400 dual core GPU and 1GB of DDR3 RAM. Apart from these, it flaunts an 8-inch 1024 x 768 XGA capacitive touchscreen along with dual cameras – a 2MP one on the rear and a 0.3MP snapper on the front. Where storage is concerned, the company has made available 8GB of memory which can also be further upgraded to around 32GB through a microSD card.

The Storage Options Scroll Elite price amounts to £199.99, while the Scroll Engage retails for £129.99. Both cost-effective slabs are available through Amazon.co.uk, Dabs.com, Hughes Electrical Scan.co.uk and various other outlets.