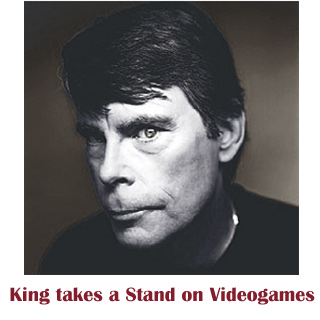 Guess whose supporting video games this time around? None other than best-selling horror author Stephen King.

If the latest Massachusetts state legislature is passed, it would restrict the sale of M-rated games to anyone under 18, but ironically allow them to legally watch Hostel.

Speaking to Entertainment Weekly, King said that though he was hesitant of his view for videogames, he was against the idea of the bill.

Stephen King said, “According to the proposed bill, violent videogames are pornographic and have no redeeming social merit. The vid-critics claim they exist for one reason and one reason only, so kids can experience the vicarious thrill of killing. Now, what does and doesn’t have social merit is always an interesting question, one I can discuss for hours. But what makes me crazy is when politicians take it upon themselves to play surrogate parents. The results of that are usually disastrous. Not to mention undemocratic.”

Though King admitted to have discontinued playing video games in the late seventies or the early eighties, he noted that there is a lot more to America’s culture of violence than Resident Evil 4.

“Parents need to have the guts to forbid material they find objectionable… and then explain why it’s being forbidden.”

“They also need to monitor their children’s lives in the pop culture – which means a lot more than seeing what games they’re renting down the street.”

He maintained that the lawmakers from Massachusetts need to find other more effective methods to refrain children from violent video games.