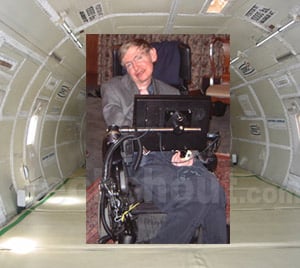 Stephen Hawking, the well known British physicist and best-selling author of “A Brief History of Time”, will soon get a chance to experience the reality of zero gravity. Hawking, who has spent the better half of his life working on a time and space theory is yet confined to a wheelchair.

Stephen Hawking suffered from a debilitating nerve disease that left him virtually paralyzed. In spite of his condition, Hawking is scheduled to encounter weightlessness aboard a roller-coaster flight slated to take place next month.

Hawking will fly on April 26 from the Kennedy Space Center, which leases its space shuttle runway to a company called Zero Gravity Corp. for flights by a modified Boeing 727 Jet. The plane that Hawking will fly in is called G-Force One, and is able to make parabolic flights to a 30,000-foot (9,144-meter) altitude. Thus passengers will be able to experience seconds of weightlessness as the speed of the craft’s descent momentarily exceeds the force of the gravitational pull of the Earth.

NASA and Russia use similar flights to train astronauts, cosmonauts and guest fliers to fly aboard the space shuttle and International Space Station.

During Hawking’s flight, medical issued will be the main concern due to the presence of degenerative nerve disease, which is also known as Lou Gehrig’s disease. His is able to articulate through a specially outfitted computer system.

“As someone who has studied gravity and black holes all of my life, I am excited to experience, firsthand, weightlessness and a zero-gravity environment,” Hawking said in a written statement. “I am thankful to Zero Gravity Corp. for making this experience available to the general public, especially for disabled individuals,” he wrote.

Zero Gravity Corp. founder Peter Diamandis will fly with Hawking. Assistants and special medical equipment will also be loaded into the craft. Hawking’s weightless flight is sponsored by a commercial arm of the state government, Space Florida.