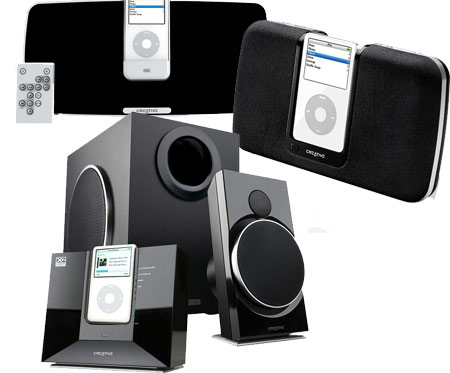 The Creative X-Fi Sound System i600 is a high-power 2.1 speaker system that has been designed to seamlessly integrate and dock with iPod players. Incidentally, this happens to be the first speaker system for iPod players that incorporates Creative award-winning X-Fi technology..

The Creative X-Fi Sound System i600 features X-Fi Crystalizer that intelligentally helps restore the detail and vibrancy lost during compression of downloaded music and movies. Besides, this docking system also incorporates X-Fi CMSS-3D technology which provides surround sound over both headphones as well as on speakers.

The Creative X-Fi Sound System i600 is bundled with satellite speakers that feature high-performance drivers for efficient reproduction of mid and high frequencies. It also features a compact subwoofer that has a dual flared port tube and a long throw 8” driver that greatly reduces any distortions, producing a clean bass. This system also comes with a multi-function wireless remote control.

The second docking speaker set introduced by Creative is the hi-fi PlayDock i500 which has been designed to play, dock and charge iPod players. This docking system has two full-range drivers and a high-power subwoofer.

The Creative PlayDock i500 docking speaker has a high-gloss finish and a contoured design. This player incorporates the Creative Wide Stereo Effect, and it also has a built-in sub-woofer that offers users superior bass.

The digital amplifier allows Creative PlayDock i500 speakers to channel its power more efficiently, ensuring a longer battery life. Being dual-powered, users can choose from eight C-size batteries, which allow 16 hours of continuous music playback on the go, or use the bundled universal power adapter. An ergonomically-designed built-in handle makes it easy for users to transport the speakers around.

Audio and video files stored in iPod players can be viewed on TVs when connected to the Creative TravelSound i. A wireless IR remote is also included to control both the speakers and iPod. The Creative TravelSound i can be powered with either four AA batteries, which allow up to 25 hours of extended music playback, or with the bundled universal power adapter.