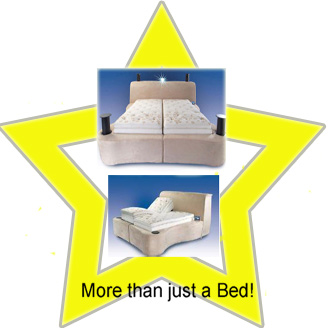 The Consumer Electronics Shows 2008 came to an end last week in Las Vegas, and as usual the annual show had a number of crazy and totally amazing technologies on display. Here is one of those bizarre technologies that will surely make all you tech freaks drool in your own pool of desire. Missouri-based Leggett & Platt showcased a comfortable bed called the ‘Starry Night”. Before you wonder whether TechShout has exited the world of technology, read on because this is no ordinary bed; it has much more to offer than just a comfortable night’s sleep.

For starters, the Starry Night bed comes with built-in load cells that monitor how the sleeper in question tosses and turns. It then adjusts itself to the most comfortable position. Very intelligent for a bed!

Other than this, vibration sensors monitor snoring and even change the occupant’s head position to open up the nose passage, for optimal breathing. Further, using Peltier Effect technology, the mattress temperature gets adjusted according to what the occupant programmed it to be. And to top it all, each side of the double bed can be programmed as per the sleeper’s needs. So, this is one bed that will allow husbands and their wives to sleep in peace!

The Starry Night bed also allows you to do things other than …well, just sleeping. For instance, this intelligent bed doubles up as a 1080p LCD movie projector. It even has speakers in all four corners, including four 8” subwoofers, a ribbon tweeter and a 2500-watt amplifier. There’s also a 3-meter wide screen on the opposite wall.

The Starry Night bed also incorporates a whopping 1.5 terabytes of hard disk storage, allowing one to store loads of movies, music and videos.

Then, the Starry Night bed also offers built-in wireless Internet and the full functionality of Windows Media Center. There’s a keyboard too.

According to Mark Quinn, group executive vice president of sales and marketing for the bedding division at Leggett & Platt, “Consumers told us that they use their beds for much more than sleep. The bed is a place for reading, watching movies, spending time with the kids, listening to music and even folding laundry. There are cars that park themselves and devices programmed to refrigerate and cook our food. But the bed has generally been a passive, inanimate object.”

Now comes the difficult part to digest. If you are one who loves to get a sound night’s sleep and you are a media enthusiast as well, then you will have to cough up something between $20,000 to $50,000, depending on which features you really need. The Starry Night by Leggett & Platt will be available in the first half of 2009.